Archive for the category “Willie Brandt”


Presley was born on January 8, 1935 in Tupelo, Mississippi but moved with his family to Memphis when he was 13.


Elvis, who has won 3 Grammy Awards, was found motionless by his girlfriend, Ginger Alder, in his bathroom about 1:30 this afternoon local time.


He was rushed to Baptist Medical Center where he was pronounced dead at 3:30 p.m.  Just 30 minutes later, Vernon Presley, Elvis’ father, announced to the press: “My son is dead.”


The cause of death is believed to be heart failure.*


*It was learned much later that Elvis actually died from the longtime overuse of prescription drugs.


On the evening news, David Brinkley of NBC-TV said: 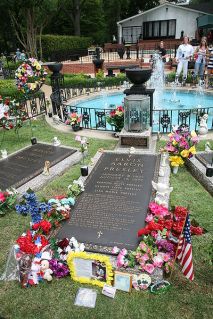 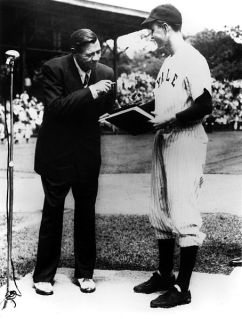 The Babe Gives His Autobiography
to Yale University
Received by George H.W. Bush


The Babe had been diagnosed with a malignant tumor in his neck in 1946 & had been undergoing experimental treatment since that time.


Mr. Ruth, who was known by various nicknames, including “The Bambino” & “The Sultan of Swat”, was 53 years old.


His body will lie in repose at Yankee Stadium, known as “The House That Ruth Built”, & the funeral service will be held at St. Patrick’s Cathedral.


Burial will be in the Cemetery of the Gates of Heaven in Hawthorne, New York.

Grave of Babe Ruth
Cemetery of the Gates of Heaven
Hawthorne, New York
Photo by Anthony 22 (2004)


Moore had also served as secretary to 2 of Boston’s mayors.


Mr. Moore is survived by his wife Mary.


ADLAI E. STEVENSON IS DEMOCRAT’S CHOICE FOR PRESIDENT OF THE UNITED STATES….AGAIN


Chicago, Illinois (JFK+50) Adlai E. Stevenson of Libertyville, Illinois was chosen once again by the Democratic National Convention as their nominee for President of the United States.


Governor Stevenson, who was defeated by Republican Dwight D. Eisenhower in the Election of 1952, will be the obvious underdog in his bid to deny President Eisenhower a 2nd term.


Prior to the balloting, Senator John F. Kennedy of Massachusetts gave the nomination speech for Governor Stevenson.*


*Stevenson makes an unprecedented decision to allow the delegates to select his running mate for 1956.


Washington, D.C. (JFK+50) President John F. Kennedy, at a meeting with Representative Samuel S. Stratton of New York today, autographed a baseball for display at the Baseball Hall of Fame in Cooperstown.


*JFK had already sent General Bruce Clark, Commander of US Forces in Europe, to West Berlin to address the situation following the building of a wall by the East German government separating East Berlin from West Berlin.


CONTINENTALS IN RETREAT AT CAMDEN


The British, with fixed bayonets, charged the Patriot line killing more than 900 with a thousand more wounded.*


*The Battle of Camden is said to have been the “worst defeat ever inflicted upon an American army in battle.” 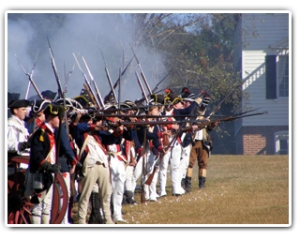 Continental Soldiers at Camden
A Re-enactment