Archive for the category “Bob Hope Gets Gold Medal”


Knoxville, Tennessee (JFK+50 Editorial) JFK+50 honors the memory of those who died in the terrorist attacks on the United States 10 years ago today.  May we never forget their sacrifice & the lessons hopefully learned from one of the most horrific days of our history.


On November 22, 1963, I was sitting in my high school social studies class as a student when the principal came over the intercom to announce that President Kennedy had been shot.


On September 11, 2011,  I was sitting in my high school social studies class as a teacher when the principal’s secretary came over the intercom to say that I might want to turn the television on.


The events on both these dates changed America & the world & not for the better.


As a teacher of United States history, I always tried to bring the subject to “life” rather than to approach it as something “past”.  In that spirit, if something of national or global significance occurred, I would not hesitate to include that in my lessons.


So following the secretary’s suggestion, I turned the classroom TV on & immediately discarded my day’s lesson.  We watched. We listened. Together we were experiencing history in the making, trying to understand what we were seeing & hearing & yet not understanding.


When I was a student in 1963, we didn’t have a TV in the classroom, but the principal put the radio broadcast on the intercom so we listened to the drama unfolding in Dallas, Texas.  We listened. Together we were experiencing history in the making, trying to understand what we were hearing & yet not understanding.


I will never forget that day in November 1963 & I’m sure my students will not forget that day in September 2001.  In times like these, you don’t need a teacher talking about something that happened hundreds of years ago, you need to know what’s happening….now. 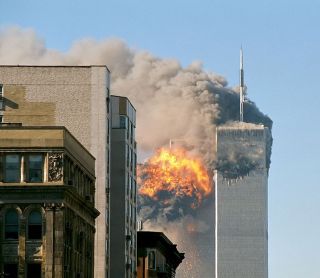 
Both airliners had been hijacked by Islamic terrorists who smuggled box cutters on board the planes & disabled the crews.  They then took control of the planes & did their bloody work.


At 9:45, American Airlines Flight 77 struck the Pentagon &  at 10:03, a 4th & final airplane, United Airlines Flight 93 crashed into a field in Western Pennsylvania before it could hit another target in Washington, D.C.


At 9:59, the south tower of the World Trade Center completely collapsed & at 10:28 the north tower also collapsed.


While it is impossible at this point to determine the total loss of life, it is reasonable to assume the figure will be in the thousands.


President George Bush, visiting an elementary school in Florida, was informed of the attacks, & soon was back aboard Air Force One.


The President spoke to the people of the United States & the world tonight at 9 o’clock from the oval office.  He said:


*This headline is taken from “The Leaf Chronicle” of  Clarksville, Tennessee dated September 12, 2001.  It is one of many 9-11 newspaper headlines available for viewing at www.newseum.org.


**2977 people were killed as a result of the terrorist attacks of 9-11-01 in addition to the 19 hijackers.  This number includes many brave New York firemen who went into the towers to save lives & in doing so gave their own.


It also includes the passengers aboard UA Flight 93 who gave their lives to stop the terrorists who took control of their airplane from crashing it into another building in Washington, D.C.


“The hole in the (New York City) skyline is symbolic of the hole in our lives, that moment that took so many of our fellow citizens to their death.”


Von Braun said to the President:


“This is the vehicle designed to fulfill your promise to put a man on the moon in this decade, and by God, we’ll do it.”


From Huntsville, JFK flew to Cape Canaveral, Florida where he toured the Launch Operations Center & then to Houston, Texas where he will speak tomorrow on the topic of space exploration at Rice University.


At Cape Canaveral, the President said:


“I don’t think that we can exaggerate the great advantage which the Soviet Union secured in the 50s by being 1st in space but I think we are on the rise.” 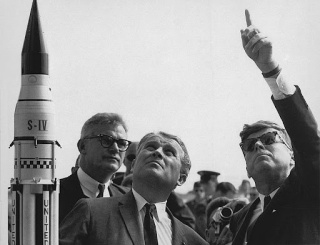 
USSR ACCUSES US OF AGGRESSION IN CUBA


Moscow, USSR (JFK+50) The Soviet government today issued a statement accusing the government of the United States of escalating tensions in President Kennedy’s recent request for the authorization from Congress to call up 150,000 reserve troops.


The Soviet statement included these words:


“If the aggressors unleashed war, our armed forces must be ready to strike a crushing retaliatory blow at the aggressor.”


The medal was presented in honor of Hope’s many years of service entertaining US troops overseas.


Mr. Hope did not abandon his comedy for this serious occasion.  Hope said that he entertained in the South Pacific when JFK was serving there.  He added….“He was a carefree young man in those days, of course all he had to worry about then was the enemy.”


Hope, who sometimes is the target of jokes about his distinctive nose, also quipped that he asked for a “nose job” for the medal but was told there would be “less gold”.


On a more serious note, JFK praised Bob Hope for “going so many places to entertain the sons, daughters, brothers & sisters of Americans who were very far from home.”


The affair was held at the Clambake Club & included music & dancing following the dinner.**


**Jack & Jackie will be married the following day at St. Mary’s Church in Newport with 750 invited guests on hand.


Moscow, USSR (JFK+50) The former Premier of the Soviet Union, Nikita Khrushchev, died today in a Moscow hospital of a heart attack.


Mr. Khrushchev, who died at 77 years of age, was born to a family of poor Russian peasants in 1894.


He is survived by his wife Nina.


Mr. Khrushchev will be buried in the Novodevichy Cemetery in Moscow.*