President Ronald Reagan was in town to speak at the opening ceremonies which were directed by nationally known television personality, singer & Tennessee native, Dinah Shore.*

The World’s Fair site was located between downtown & the campus of the University of Tennessee.

The site included a 266 foot steel tower topped with a 5 story gold globe known as the Sunsphere. 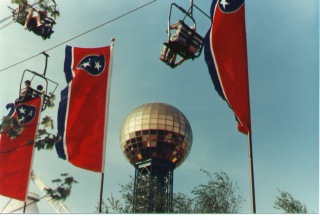 The theme of the fair was “Energy Turns the World.”

Participants in the 1982 World’s Fair included the following nations: 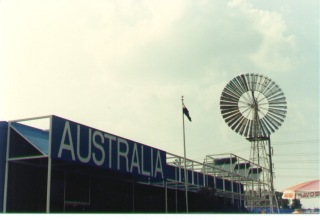 The fair closed on October 31, 1982 after welcoming 11 million visitors.

*Following is an excerpt from the President’s address:

“It is a special pleasure for me to be here….in the shadow of the Sunsphere, a symbol of energy potential, near the banks of the Tennessee River.  All Americans can be proud of this World’s Fair (which will be host) to the representatives of 22 nations.  Americans welcome the world to Tennessee.”

Posted in JFK+50 REMEMBERS THE OPENING OF THE 1982 WORLD'S FAIR and tagged 1982 World's Fair, Sunsphere | Leave a comment