Archive for the category “Sirhan Sirhan”

After having been projected as the winner of the 1968 California Democratic Primary, New York Senator Robert F. Kennedy was shot early this morning at the Ambassador Hotel in Los Angeles.


RFK had just completed a victory statement to his supporters in the ballroom of the Ambassador Hotel.  He was walking through the hotel kitchen when shots rang out. 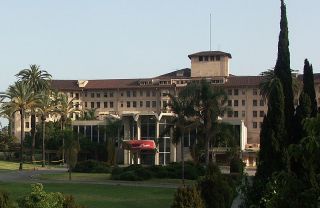 
It  was 12:15 a.m. PDT, as Kennedy was shaking hands with hotel employees, when he was approached by a “guy who…came out of the corner near the ice machine” according to a witness.


“Kennedy backed up as the gunman fired at him from point blank range.”


One of the shots hit Senator Kennedy in the head.  He fell to the floor of the kitchen with his head laying in a pool of blood.


Later the bushy haired 24 year old would-be assassin was identified by Los Angeles Mayor Samuel Yorty as Sirhan Bishara Sirhan, a Jordanian immigrant born in Jerusalem.  Sirhan came to the US in 1957.


The weapon was recovered & identified as a 22 caliber Iver-Johnson Cadet pistol.


The Senator was taken by ambulance to Central Receiving Hospital & then transferred to Good Samaritan Hospital.


RFK’s Press Secretary, Frank Mankiewicz, kept reporters up to date on the progress of the surgery.


He announced that RFK’s condition is listed as “extremely critical as to life.”* 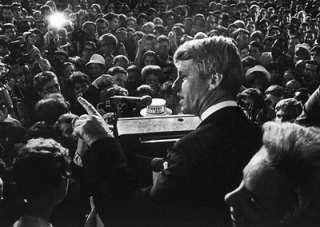 
I have been recording the audio of television & radio coverage of the California Primary this evening.


Election officials in California were having some problems getting the returns counted, so it was to be a long night.


Finally, I was pleased to hear them announce that Robert Kennedy was projected to win.


Although it was getting very late, I wanted to stay up & listen to the Senator’s victory speech.


As soon as RFK finished speaking, my local television station played the National Anthem & signed off.  It was 3:15 a.m. in Knoxville, Tennessee.  I went to bed.


*I had been watching ABC-TV coverage of the California Primary & although their feed continued to be available nationwide, the local Knoxville affiliate signed off the air immediately after the victory speech.


“What has been going on in the United States…the division, the violence….whether its between black & white, between the poor & the more affluent or between age groups or over the war in Vietnam…..we can start to work together.”


Ronald Wilson Reagan, the 40th President of the United States (1981-1989),  passed away today at his home in Bel Air, California.


President Reagan was diagnosed with Alzheimer’s Disease in August 1994.


Shortly after his inauguration, President Reagan was shot but survived.


Reagan’s high moment as President came on June 12, 1987 when he visited Berlin & said these words:


The mother of the child, Lee Radziwill, is Jacqueline Kennedy’s sister.


The President of the United States became the child’s godfather.


A reception was held at the Radziwill residence following the ceremony.


Later in the evening, the Kennedys attended a dinner given by Queen Elizabeth & Prince Philip at Buckingham Palace.


He said that the US plans to build supersonic transport planes for commercial use.


The visit to the AF Academy begins a 5 day tour of the Western states for JFK.