Archive for the category “Attack at Dien Bien Phu”


At 5 o’clock this afternoon in Vietnam, 40,000 Viet Minh communists surrounded 15,000 French troops near the Laotian border.


The attack began with a surprise artillery barrage & by 6:15 p.m. the French command had been decimated.*


*The Battle of Dien Bien Phu will continue until May 7, 1954 when the Viet Minh are victorious over the French. 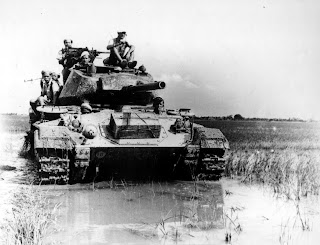 US M24 CHAFFEE Light Tank used by the French in Vietnam


Secretary of War Robert Patterson approved today the establishment of a K-9 Corps for the U.S. Army.


The dogs will receive 8 to 12 week training as sentries, scouts, messengers & mine detectors.*


*A K9 named “Chips” received wounds in an attack on a enemy machine gun nest in Italy.  Chips, a German Shepherd-Collie-Husky mix,  forced the entire crew to surrender.  He was in the 3rd Military Police Platoon of the 3rd Infantry Division.


Chips died from complications of his wounds 7 months after returning stateside.  He was 6 years old. 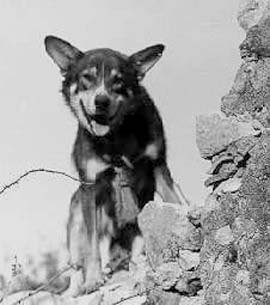 
Today the senate of the state of Tennessee passed by a vote of 24 to 6 the Butler Act.


The act, previously passed by the Tennessee House of Representatives in January, “prohibits the teaching of the Evolution Theory in all the Universities & all other public schools of Tennessee.”*


*The Butler Act will be signed into law by Governor Peay on March 21 but will be challenged in the Scopes “Monkey” Trial in Dayton, Tennessee in July.


“to compel a man to furnish…money for the propagation of opinions which he disbelieves is….tyrannical…”


Lippman points out that the Butler Act only prohibits the teaching of the Evolution Theory in schools of Tennessee which the taxpayers are required by law to contribute. 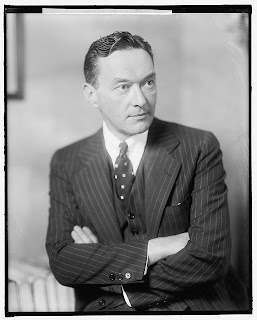 
Alexander II, ruler of Russia since 1855, was assassinated today in the streets of St. Petersburg.


Two separate bombs were thrown from the crowd as his carriage passed by.  The 2nd bomb caused massive damage to the Czar including tearing off both his legs.


The Czar was taken back to the palace where he died.


The assassin is thought to be a member of a terrorist group known as “the People’s Will”.*


*A 3rd assassin had waited with another bomb just in case. 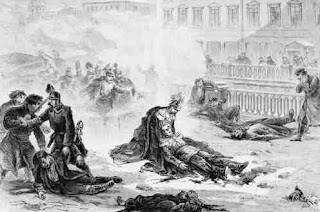 
Johnson, the 1st president to be impeached or “charged with high crimes or misdemeanors”, became president on the death of Abraham Lincoln on April 15, 1865.


Since becoming president, Johnson has been the target of radical Republicans who believe his reconstruction policies, like Lincoln’s, are too lenient on the South.


Chief Justice Salmon P. Chase presides over the trial which will require, by the U.S. Constitution, a 2/3 guilty vote for removal from office.


In today’s session, the President’s attorneys requested a 40 day period to prepare a defense.  The Chief Justice ruled they will have 10 days to prepare.  The trial is to resume on March 23.* 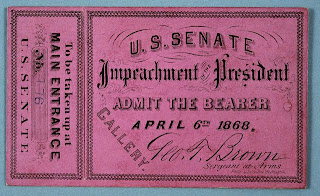 Ticket to Senate Gallery for Trial

Posted in Attack at Dien Bien Phu | Leave a comment