The Memorial was dedicated in 1912 & the dedication ceremony, held on June 8, was attended by President William Howard Taft. 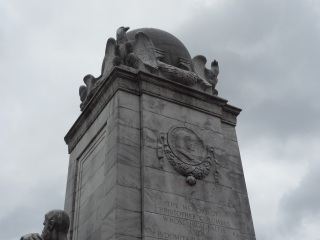 
The inscription on the memorial reads:


“To The Memory of Christopher Columbus Whose High Faith & Indomitable Courage Gave To Mankind a New World.”*


*The Memorial is located at Massachusetts Avenue & 1st Street directly in front of Washington’s Union Station.


Columbus, born in Genoa, Italy, went ashore & claimed the land for the Spanish Crown.  He named the island, which he believes is somewhere off the coast of the East Indies, San Salvador or Holy Savior.*


*Columbus actually had landed in the Bahamas but since the existence of the Americas was unknown at the time, he incorrectly assumed he was somewhere off the coast of Asia.


JFK arrived at the Raleigh-Durham Airport where he was greeted by Governor Terry Sanford.


The President then traveled to Charlotte where he opened the North Carolina Trade Fair.


Then he spoke at Kenan Stadium at the University of North Carolina in Chapel Hill.


“North Carolina has long been identified with enlightened & progressive leaders & people & I can think of no more important reason for that reputation than this university.”


The President was then presented with an honorary degree.*


From Chapel Hill, JFK traveled to Fort Bragg where, as “Commander-in-Chief”, he inspected the 82nd Airborne Division, spoke to the troops & observed a military demonstration.**


**Before visiting Fort Bragg, JFK had issued an authorization making the “Green Beret” a part of the uniform of the US Special Forces.


New York City (JFK+50) In one of the most bizarre scenes of the Cold War, Soviet Premier Nikita Khrushchev today pounded his shoe on a table in protest to a speech being given critical of Soviet policy.


In attempting a call to order, General Assembly President Frederick Boland of Ireland broke his gavel.


It was that kind of day at the United Nations.

Khrushchev Pounds Shoe at the U.N.


Moscow, USSR (JFK+50) The USSR took a leap forward today in the space race by successfully launching Voskhod I, the 1st spacecraft to carry more than one crewman into space.


The Voskhod I is scheduled for a 2 day mission in orbit around the earth.


The cosmonauts on board are: Vladamir Komarov, Konstantin Feoktistov & Boris Yegorov.


Lee explained to the President that he could not “raise his sword” against his native state of Virginia.