Archive for the category “Sputnik II”

The Russians are hopeful this mission will pave the way for human spaceflight by providing scientists with important data on how animals respond to the space environment.*


*Laika was not expected to survive the flight but her death came hours after launch due to a malfunction in the cooling system which caused the on board temperature to rise to 104 degrees F.  This was not made public at the time.


JFK HAS NO PLANS TO SEND COMBAT TROOPS TO VIETNAM


After the 2 hour meeting, White House sources confirmed that both the President & General Taylor are in agreement that United States combat troops should not be sent to South Vietnam.


The administration, however, is planning to send additional military “advisers” to train South Vietnamese soldiers in irregular warfare.* 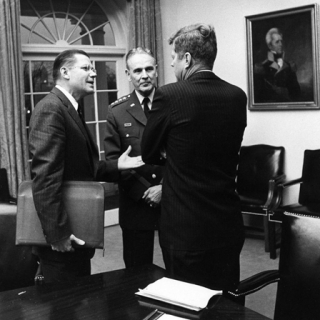 
Washington, D.C. (JFK+50) Lyndon Baines Johnson, who assumed the Presidency upon the death of John F. Kennedy on November 22, 1963, was elected today in a historic landslide over his conservative Republican opponent, Senator Barry Goldwater of Arizona.


Goldwater carried only 5 states of the Deep South along with his home state of Arizona.


The final popular vote total was 43 million to 27 million.


President Johnson will be inaugurated for his 1st full term on January 20, 1965.


Nixon said the United States will continue…“our support for the war in Vietnam.”


The President added that “our commitment in Vietnam (continues) until the communists agree to a fair & honorable peace.”


Mr. Nixon called upon the “great silent majority” of Americans to support him in his quest for an honorable peace. 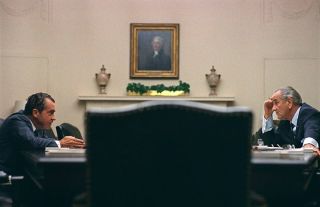