Archive for the category “Khrushchev Out as Soviet Premier”

KHRUSHCHEV OUT AS SOVIET PREMIER


KHRUSHCHEV OUT AS SOVIET PREMIER


Moscow, USSR (JFK+50) In power since replacing Joseph Stalin in 1953, Nikita Khrushchev was forced to give up his position as Premier of the Soviet Union today.


In October 1962, Mr. Khrushchev & the late U.S. President John F. Kennedy were able to negotiate their way out of a possible nuclear war over the placement of Soviet nuclear missiles in Cuba.


“He could be charming or vulgar, ebullient or sullen, he was given to public displays of rage & to soaring hyperbole in his rhetoric.  But…he came across…more human than his predecessor (Stalin) & that was enough to make the USSR seem less…menacing.” 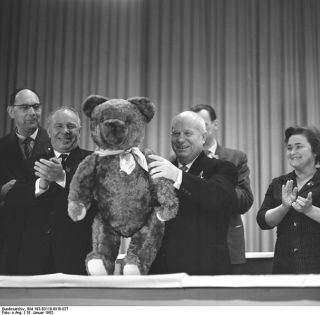 
Geneva, Switzerland (JFK+50) The leader of the civil rights movement, Dr. Martin Luther King, Jr., was awarded the Nobel Peace Prize today for his leadership in non-violent resistance to racial prejudice in the United States.


Dr. King plans to donate the $54,600, which comes with the Nobel Prize, to the civil rights movement.*


*On Sunday, October 16, 2011, the new Dr. Martin Luther King, Jr. Monument in Washington, D.C. will be dedicated by President Barack Obama.  Be sure to check JFK+50 on that day for that story. 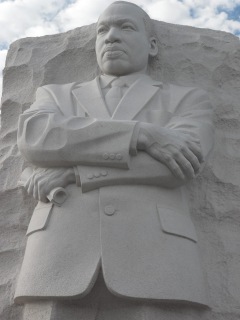 
“You have created in your own land a stable, free & democratic society which stands in sharp contrast to the repression still enforced on so many of your countrymen.”


JFK was greeted by 10,000 students of the University of Michigan.


The Senator did not give a formal speech but spoke for 3 minutes.


JFK began by saying: “Thanks to you, as a graduate of the Michigan of the East, Harvard University…..”


Senator Kennedy then asked the students:


*This was the 1st public reference by JFK to his plans for a Peace Corps.


TR SHOT ON CAMPAIGN IN MILWAUKEE


Milwaukee, Wisconsin (JFK+50) Former President of the United States & Progressive Party nominee in 1912, Theodore Roosevelt, was shot today while greeting the public in front of the Gilpatrick Hotel.


TR was shot in the chest as a 32-caliber bullet passed through his glasses case & folded manuscript which were in his breast pocket.


Despite the wound, Roosevelt went on to speak for an hour & at one point pulled the bloody manuscript from his pocket, held it up for the audience to see, & said: “It takes more than one bullet to kill a Bull Moose.”*


The shooter has been identified as John Schrank.  His motives are not known at this time.


*TR’s Progressive Party was known as the “Bull Moose” Party.


**Schrank was later committed to a mental hospital.

Posted in JFK at University of Michigan, Khrushchev Out as Soviet Premier | Leave a comment