Archive for the category “Peace Corps”


“They will be farmers, teachers, craftsmen, nurses, doctors & technicians of all kinds.  They will be a cross-section of the finest men & women that this nation has to offer.”


The ICC order says that beginning on November 1, 1961, segregation on interstate buses & at interstate bus terminals will be prohibited.


The order follows the decision of the United States Supreme Court on December 5, 1960 in Boynton v. Virginia that segregation at bus terminal waiting rooms & restaurants is unconstitutional.


“In my judgment, there’s no question of the legal rights of the…Freedom Riders*, to move in interstate commerce.”


*Freedom Riders were civil rights activists,black & white, male & female, who came from the North to the South to test the Supreme Court ruling.


GROMYKO SAYS US INTERVENTION IN CUBA WILL CAUSE A NUCLEAR WAR


*There is no doubt that Soviet placement of nuclear weapons systems just 90 miles from Key West, Florida did, in fact, almost cause a nuclear war.


Come back to JFK+50 in October for the account of the Cuban Missile Crisis.


As the President was leaving the St. Francis Hotel & about to enter his car, a woman identified as Sarah Jane Moore fired a shot at him.


Fortunately, Oliver Sipple, standing near her, grabbed her arm as she fired & the shot missed.


Secret Service agents reacted quickly & spirited the President into his car & out of harm’s way.


Washington, D.C. (JFK+50) President Abraham Lincoln today issued an executive order which declares “that all persons held as slaves are, and henceforward, shall be free.”


The ‘Emancipation” applies only to states that have seceeded from the Union as well as parts of the Confederacy that has come under the control of the Union army.


Former slave Frederick Douglass described the moment when the words of the Emancipation came over the telegraph wires:


“The scene was wild & grand. Joy & gladness exhausted all forms of expression, from shouts of praise to joy & tears.”*


*The preliminary Emancipation Proclamation provided that if the South did not end the war & rejoin the Union by January 1, 1863, all slaves in the Confederacy would be free.  The 2nd Executive Order specified the states to which the order applied.

President Obama Displays a Copy
of the Emancipation Proclamation*
in the Oval Office
January 18, 2010
Photo by Pete Souza


*The copy was on loan from the Smithsonian Institution.


New York City (JFK+50) 21 year old Nathan Hale, a school teacher by day & a spy for General George Washington at night, was executed here today after being captured by the British military.


Hale, a graduate of Yale University, was charged with espionage but was not given the benefit of a trial.


He was asked, however, before his execution if he had any final words:


“I only regret that I have but one life to lose for my country.*


*In 1985, Nathan Hale was officially designated as the “State Hero” of Connecticut.


Although JFK 1st talked about the possibility of a Peace Corps during his campaign in 1960, a bill had previously been introduced in the US Senate by Hubert Humphrey (D) Minnesota in 1957.


JFK sees the corps as both a means of giving young Americans to answer his call to service “…ask what you can do for your country” & to counter anti-American viewpoints around the world.* 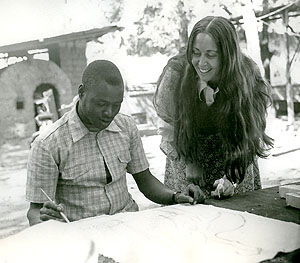 
*JFK’s brother-in-law, Sargent Shriver, will be appointed 1st director of the Peace Corps.  Within just 2 years, the organization will have 7300 volunteers serving in 44 countries. 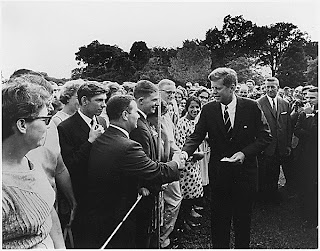 
Mickey Mantle, who made his debut for the New York Yankees in right field in 1951, retired today from the game of baseball.


Mantle, born in Spavinaw, Oklahoma on October 20, 1931, dominated the American League for more than a decade.


In 1956, he won baseball’s “Triple Crown” for the highest batting average, most home runs & most RBIs.* 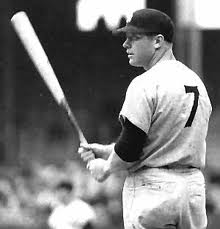 
*Personal Note:  Mickey was my hero as a youngster, even before JFK.  All the boys in my elementary school in the late 1950s cheered for the Yankees.


Charles Lindbergh III, the 20 month old son of the famous aviator, Charles A. Lindbergh, was kidnapped today from his crib.


The Lindberghs, Charles & his wife Anne, were in their new home at Hopewell, New Jersey, when the kidnapper apparently entered the nursery by climbing up a ladder & going in through an open window.


The Lindberghs, after discovering the baby was gone, found a ransom note demanding $50,000.*


*2 months later the baby’s body was found less than a mile away from the Lindbergh home.  A marked bill from the ransom was traced to Bruno Hauptmann who was found guilty & electrocuted in 1935. 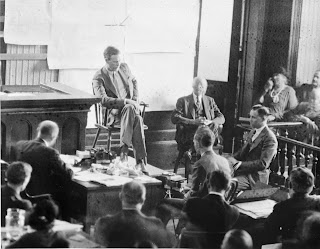 Charles A. Lindbergh on the witness stand


President Grant signed a bill today which will create the Yellowstone National Park.


By the act passed by congress, over 1.2 million acres of public land will be set aside for preservation “from injury of spoilation, of all timber mineral deposits, national curiosity or wonders within.”


*The Yellowstone National Park is within the present states of Wyoming, Montana & Idaho. 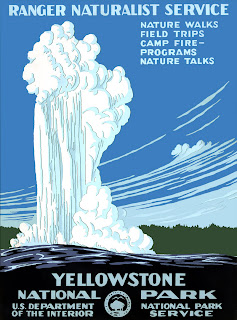 
THE ARTICLES ARE RATIFIED


After 16 months of debate, the Articles of Confederation have been ratified.


The 1st constitution of the United States creates a congress with each state delegation having one vote.


There will be no executive or judicial branches of the central government.


The Articles, further, may not be changed without unanimous consent of all states.*


*The Articles are replaced in 1789 with the U.S. Constitution. 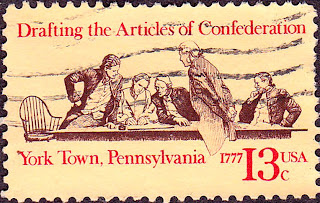 
The three women will be held pending trial.*


*More than 150 women & men will be accused & in June 1692 a special court will meet in Salem, Massachusetts.  By the time the “witch hysteria” is over, 19 people will be found guilty & hanged & 1 is pressed to death under heavy weights. 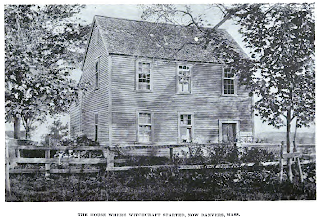