Later, from the deck of the Observation, JFK sees a Polaris missile launch from a submarine.


The Governor was fined $10,000 & sentenced to jail for contempt, but he never paid the fine nor served the sentence because the ruling was overturned in an Appeals Court.


Although JFK has been concerned about advances made in Southeast Asia by the communist Viet Cong, he has been reluctant to commit US combat forces.


The President is hopeful that the increased military aid will help strengthen the South Vietnamese government & military.*


The scientists had previously served Adolf Hitler’s Third Reich, but the United States needs their services & wants to keep them from being “snatched away” by the Soviets.


Upon their arrival today, newsmen & photographers were not permitted to ask questions or take photographs.


Longstreet had been sent to Knoxville from Chattanooga by CSA commander Braxton Bragg.


Bragg hopes that Longstreet’s forces will be able to capture the pro-union area for the Confederacy.*


*After the Battle of Campbell’s Station, Longstreet took up positions just outside of Knoxville where another battle will soon take place. 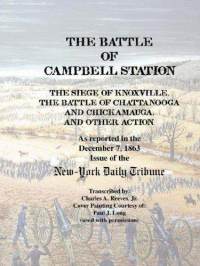