Archive for the category “Telstar II”


The satellite is a joint venture of NASA, Bell Laboratories & AT&T.


It is nearly identical to Telstar I which was launched last year but began to malfunction this past February.


Like Telstar I, Telstar II will make it possible for live television images to be transmitted across the Atlantic Ocean.


Ho Chi Minh was re-elected today as president of the Democratic Republic of Vietnam.* 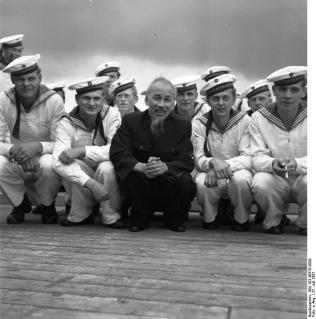 
The battle began with a massive Viet Minh artillery barrage, followed by an infantry assault.


The struggle between the French & Viet Minh began in 1946. The Battle of Dien Bien Phu marked the end of French involvement in SE Asia.


*TTEC will become SONY, the 1st company in the world to make transistors commercially successful.


The SONY transistor radio will be manufactured in 1955 & revolutionize electronics in America & around the world.


The name SONY comes from Sonus (Latin for sound) & Sonny (American for boy).


The largest, fastest & most luxurious passenger liner in the world, The Lusitania,  was sunk today by a single German torpedo fired from a U-boat or submarine.


While the luxury liner, on its way from New York City to Liverpool, was sailing in the “war zone”, there is no indication a warning was given prior to the attack.


Witnesses say the liner sank within 18 to 21 minutes of the torpedo’s explosion in the forward hold.


*It was learned much later that the Lusitania was carrying tons of contraband munitions from the US, a neutral at the time, to Great Britain, at war with Germany.