Archive for the category “Inauguration”

Today we celebrate the 50th anniversary of the INAUGURATION of JOHN FITZGERALD KENNEDY as the 35th President of the United States.

Associated Press Photo
“Washington had never seen anything like it:  the tidal wave of glamour, promise, and high spirits that descended on the capital for the 1961 inauguration of the youngest president ever elected, John F. Kennedy–a movable, star-studded bash that couldn’t be stopped even by a massive snowstorm.”*
*From Vanity Fair, “From That Day Forth”,  by Todd S. Purdum, February 2011.

Today John Fitzgerald Kennedy is sworn in as the 35th President of the United States as well as the youngest elected President in our history.

He is the 1st  president of Irish descent as both his parents, Mr. & Mrs. Joseph P. Kennedy, Sr., are Irish-Americans.


It is also the 1st inaugural in which a poet is invited to participate.  Robert Frost recites “The Gift Outright”.

The land was ours before we were the land’s.
She was our land more than a hundred years
Before we were her people. She was ours
In Massachusetts, in Virginia,
But we were England’s, still colonials,
Possessing what we still were unpossessed by,
Possessed by what we now no more possessed.
Something we were withholding made us weak
Until we found out that it was ourselves
We were withholding from our land of living,
And forthwith found salvation in surrender.
Such as we were we gave ourselves outright
(The deed of gift was many deeds of war)
To the land vaguely realizing westward,
But still unstoried, artless, unenhanced,
Such as she was, such as she would become.
And for this occasion, let me change that to: what she will become. 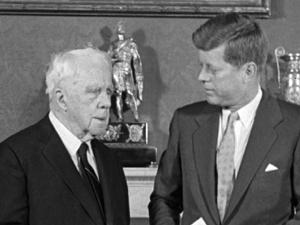 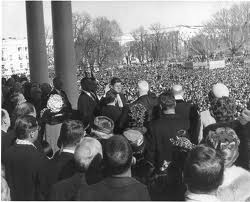 
Following are some selected highlights:

“We observe today not a victory of party, but a celebration of freedom — symbolizing an end, as well as a beginning — signifying renewal, as well as change. For I have sworn before you and Almighty God the same solemn oath our forebears prescribed nearly a century and three-quarters ago.Let the word go forth from this time and place, to friend and foe alike, that the torch has been passed to a new generation of Americans — born in this century, tempered by war, disciplined by a hard and bitter peace, proud of our ancient heritage, and unwilling to witness or permit the slow undoing of those human rights to which this nation has always been committed, and to which we are committed today at home and around the world.

Let every nation know, whether it wishes us well or ill, that we shall pay any price, bear any burden, meet any hardship, support any friend, oppose any foe, to assure the survival and the success of liberty.All this will not be finished in the first one hundred days. Nor will it be finished in the first one thousand days; nor in the life of this Administration; nor even perhaps in our lifetime on this planet. But let us begin.


Now the trumpet summons us again — not as a call to bear arms, though arms we need — not as a call to battle, though embattled we are — but a call to bear the burden of a long twilight struggle, year in and year out, “rejoicing in hope; patient in tribulation,” a struggle against the common enemies of man: tyranny, poverty, disease, and war itself.
In the long history of the world, only a few generations have been granted the role of defending freedom in its hour of maximum danger. I do not shrink from this responsibility — I welcome it. I do not believe that any of us would exchange places with any other people or any other generation. The energy, the faith, the devotion which we bring to this endeavor will light our country and all who serve it. And the glow from that fire can truly light the world. 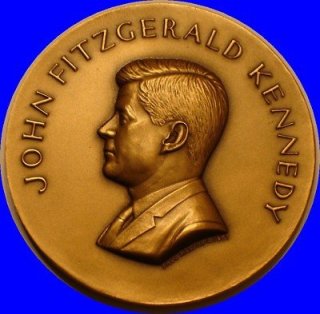 I always told my students that in my view JFK’s inaugural address is the best of the 20th century.

“From Kennedy’s opening words to his last, the speech was one for the books, ranking, by broad consensus, with FDR’s first inaugural as the most stirring of the 20th century….”

“And unlike some speeches whose greatness was appreciated only much later, Kennedy’s was widely seen as great from the moment he delivered it.” 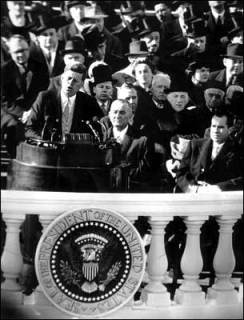 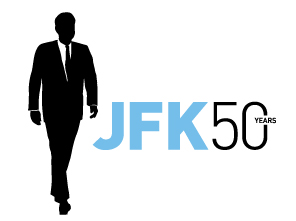 In celebration of the 50th anniversary of President Kennedy’s inauguration, today the John F. Kennedy Presidential Library and Museum has officially launched www.JFK50.org – an innovative multimedia website designed to reflect the vibrancy and excitement of the Kennedy administration.*
*Courtesy of JFK Library