Archive for the category “Albert B. Fall Resigns”

Washington, D.C. (JFK+50) 90 years ago today, January 2, 1923, President Warren G. Harding’s Secretary of the Interior, Albert B. Fall*, resigned in the midst of a financial scandal known as Teapot Dome. 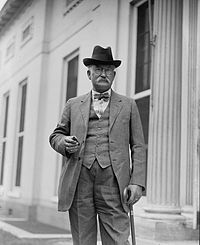 Oil reserves in California & Wyoming were public lands containing oil supplies which were available only on an emergency basis for the U.S. Navy.

The lands in Wyoming were dubbed Teapot Dome because of an unusual rock formation located there.

Albert B. Fall, who became Secretary of the Interior in 1921, leased Teapot Dome to Henry Sinclair’s Mammoth Oil Company in return for $400,000.

Teapot Dome became publicized in 1922 when the Wall Street Journal reported that the oil leases had been given away by Fall to his friends.

The presidency of Warren G. Harding was to be forever tarnished by Teapot Dome & other scandals.  He died in August 1923 & although popular during his short term as president was doomed to be rated as one of the poorest United States presidents.

Albert B. Fall, who also contracted with Edward Doheny of Pan American Corporation for building of storage tanks in return for drilling rights, became the 1st cabinet member to be sent to prison for actions during his tenure.

*Albert Bacon Fall (1861-1944) was born in Frankfort, Kentucky & attended schools in Nashville, TN.  He moved to the New Mexico territory & practiced law.  Fall became a judge in 1893, served in the Spanish-American War & was elected US Senator for New Mexico in 1912.