The telegram was sent as the Kennedy administration prepares to withdraw federal troops from the University of Alabama at Tuscaloosa.


JFK tells the governor to use state police to keep order in the city. 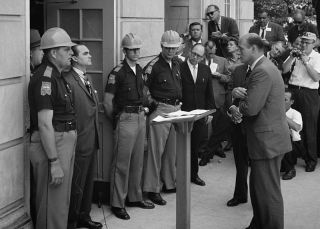 Governor Wallace at the University of Alabama


President Lyndon B. Johnson’s National Security Adviser, McGeorge Bundy, informed the National Security Council today that the President has decided to postpone submitting a resolution to Congress asking for the authority to wage war in Vietnam.


LBJ apparently is concerned, at least for the present, that such a resolution would threaten passage of his civil rights proposals.*


*LBJ will change his mind 2 months later when he submits the Gulf of Tonkin Resolution.


US OFFERS BARUCH PLAN TO UN


Today the United States presented the plan developed by Bernard Baruch for the international control of atomic weapons to the United Nations.*


*The Soviets reject the plan & presents one of their own calling for a ban on all nuclear weapons.  The US will in turn reject the Soviet proposal. 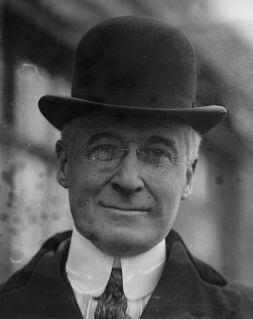 
THE BATTLE OF SAIPAN BEGINS


The Battle of Saipan began today in the Mariana Islands of the Pacific Ocean.


The US landings began at 7 a.m. local time with more than 8000 Marines hitting the western coast of Saipan in a two hour period.


The Japanese command were reportedly surprised by the location of the landings, expecting an attack further south.* 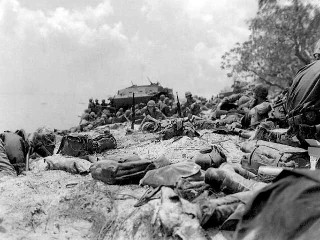 
More than 1200 land owners were forced to vacate their properties leaving behind many farm buildings, mills, schools & churches.


Between 1924 & 1935 Colonel David Chapman, a Knoxville druggist, played a leading role in making the national park a reality.*


*I have been blessed to live all of my life in the foothills of the Great Smoky Mountain National Park.  I grew up along & live today just off “Chapman Highway” which was built to connect Knoxville with the National Park.


The highway, of course, is named after Colonel David Chapman & is the same road FDR traveled to reach the park for the dedication ceremonies.


Two hundred acres around the Custis-Lee Mansion in Arlington, Virginia have been set aside as a national cemetery by order of Secretary of War Edwin M. Stanton.*


*President Kennedy was buried in a plot just below the mansion on November 25, 1963.


In signing the Oregon Treaty of 1846 today, representatives of Great Britain & the United States establish the dividing line between their to nations at the 49th parallel from the Rocky Mountains to the Strait of Georgia.


Even though President James K. Polk ran on a platform of “54, 40 or fight”, neither he nor the British government wanted another war. 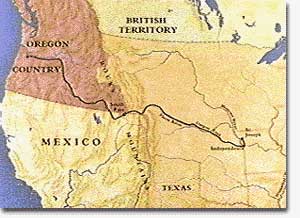 
King John of England today put his Royal Seal on the Magna Carta or “Great Charter”.


By the charter, the King will respect feudal rights & privileges, uphold the freedom of the church & maintain national laws.*


*The Magna Carta will be recognized as the cornerstone of English democracy.  4 original copies of the charter exist today, one in London Cathedral, one in Salisbury Cathedral, & two in the British Museum. 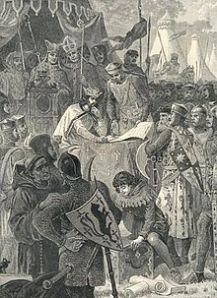 
The baby boy was born at Fort Sanders Hospital in Knoxville, Tennessee.


The baby’s father works for White Produce Company in downtown Knoxville.  His mother, Mavis White, is a native of Sydney, Australia.*


*So I am celebrating my 63rd birthday today as my daughter, Jennifer, begins the 1st night of competition for “Miss Tennessee 2011” in Jackson. 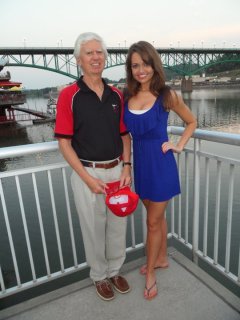