Archive for the category “JFK Died 48 Years Ago Today” 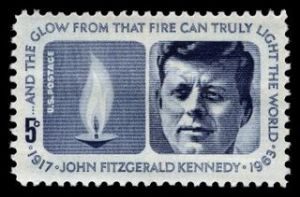 I was a 15  year old sophomore at Young High School here in Knoxville.


During my 6th period World Geography class, Mr. John Hicks, our principal, came on the intercom.


While I do not remember his exact words, I know he announced that President Kennedy had been shot.


Mr. Hicks then turned the intercom to radio & we listened to the news reports from Dallas.


My own high school students would later ask me what the reaction of my fellow students was to the news.


I told them that we were all in a state of shock.  Not one word was spoken.


There had not been a Presidential assassination since William McKinley in 1901 & the last unsuccessful attempt on President Truman happened when we were 2 years old.


My generation grew up in a state of innocence.  We, as well as many of our parents, could not believe this could happen in our country.


At some point, Mr. Hicks told us that he would leave the radio on & we would stay in our 6th period class until the end of the school day.


When the announcement came over the radio that President Kennedy had died, Mr. Hicks came back on.


Every morning at Young, we all stood to attention as the school bugle corps played “Reveille” as the American flag was raised to full staff.


Now, Mr. Hicks asked his faculty & students to stand at attention as the bugle corps played “Taps” & the flag was lowered to half-staff.


Other than the loss of friends & relatives, this is the saddest moment of my life.


JFK was my hero as he was a hero to many Americans & to many people around the world.


The moment that we learned our hero, who was the youngest elected President of the United States,  was murdered was one that none of us would ever forget.


We all remember to the detail where we were & what we were doing when we heard the news.


JFK inspired me as our President, & he has continued to inspire me 48 years after his death.


A letter to the editor in today’s Knoxville News-Sentinel today expresses so well the impact that JFK had on my generation.


“What did (JFK) possess besides his charm, good looks, youth & wit that caused this feeling to be with us still?”


In answer to his own question, Mr. Lutze answers:


“It seems that this man stimulated a deep & vibrant hope, a dream of what could be, a time in history that has become known as a brief, shining moment.


His greatest contribution was just that, to bring hope, to inspire a sense of confidence in the people themselves, a sense of trust & purpose in the American government.


He was not perfect.  He had his faults, his weaknesses, his misjudgments.  But the American people forgave his shortcomings because he gave us a sense of what human beings, despite their imperfection, can do in a short time on the Earth.”


Thank you, Mr. Lutze, for expressing so well the feelings of so many of us about the man who we honor today on this, the 48th anniversary of his death.*


*For more information on November 22, 1963, check out my JFK ASSASSINATION BLOG www.jfk50d.blogspot.com


I will post accounts from my copy of the Knoxville News-Sentinel Final Edition for Nov 22, 1963.

Posted in JFK Died 48 Years Ago Today | Leave a comment