Archive for the category “JFK Mourning Ends With Candlelight Service”

Washington, D.C. (JFK+50) President Lyndon B. Johnson spoke last night at a candlelight service at the Lincoln Memorial to officially end the 30 day period of mourning for the late President John F. Kennedy.


“As it was 100 years ago, so it is now.  We have been bent in sorrow, but not in purpose.  We buried Abraham Lincoln & John Kennedy, but we did not bury their dreams or their visions.”


This group of POWs had been held in captivity for 20 months.


The release of the prisoners was gained in exchange for $53 million worth of food & medicine.

POWs of the Bay of Pigs
http://www.latinamerican.studies.org


Washington, D.C. (JFK+50) President Harry S Truman today appointed an amnesty board to review the cases of those imprisoned for refusal to serve the United States in WWII.


The 15,000 cases involve men who were drafted into the service but refused to serve in any capacity, combatant or otherwise.


The President wants the board to review individual cases to determine if any were unjustly punished & thus eligible for presidential pardon.*


*The board reported back one year later that 1500 of the 15,000 cases merited “full amnesty.”  They included those belonging to pacifist religious groups.  On December 23, 1947, President Truman granted a pardon in these cases & restored political & civil rights to those so pardoned. 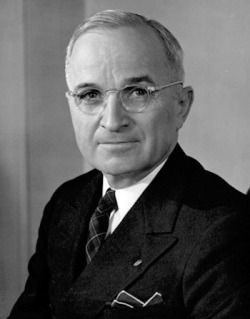