Archive for the category “Patriot Act”


Washington, D.C. (JFK+50) The White House announced today that at 7:50 this morning the 1st ship was stopped & searched by the United States Navy at the “Quarantine Line” east of Cuba.


A boarding party from the USS Joseph P. Kennedy, Jr. (named after JFK’s older brother) inspected the cargo of the Marucla, a Lebanese freighter under charter to the USSR.


The inspection, according to the White House, turned up no offensive weapons & so the Marucla was allowed to proceed towards Havana, Cuba.


Washington, D.C. (JFK+50) According to White House sources, President John F. Kennedy received a letter from Premier Nikita Khrushchev of the Soviet Union this evening in which he proposes an idea on how to end the Cuban Missile Crisis.


Khrushchev began by restating that Soviet missiles in Cuba are for defensive purposes only.


Then, the Chairman proposes, in the letter,  that if the United States will recall its fleet & make a promise not to invade Cuba, “the necessity for the presence of our military specialists would disappear.”*

*At the Pentagon, General Curtis LeMay was not impressed. He told his colleagues that Khrushchev’s letter was a lot of “b.s.” & that the Soviet Premier must believe “we are a bunch of dumb s___s, if we swallow that syrup!”**
**Source: Michael Dobbs, “One Minute To Midnight” (2008).

President GW Bush, Obama & Clinton
Photo by Pete Souza
White House Photo (2010)
October 26, 1881
GUNFIGHT AT OK CORRAL IN TOMBSTONE
Tombstone, Arizona Territory (JFK+50) This morning, the City Marshall, V. W. Earp arrested a cowboy named Ike Clanton for disorderly conduct & he was fined $25 & disarmed in the Justices’ Court.
Clanton left, swearing vengeance on the Sheriff & Marshall Earp & his brother Morgan who tried to induce Clanton to leave the town, but he refused to be pacified.
At 3 o’clock P.M., the Earp brothers & J.J. Halliday met 4 cowboys, namely the 2 Clanton brothers & 2 McLowery brothers, when a lively fire commenced from the cowboys against the 3 citizens.  About 30 shots were fired rapidly.*
When the smoke cleared, Frank & Tom McLaury & Billy Clanton lay dead while Morgan & Virgil Earp, along with Doc Holliday, were wounded.  Wyatt Earp was unharmed.
*This part of the news article is from a newspaper of the time. 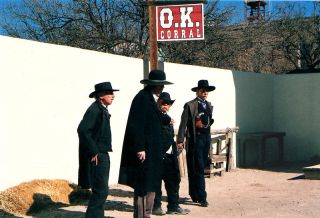 View of Eastbound Lockport
on the Erie Canal
by W.H. Bartlett (1839)
Buffalo, New York (JFK+50) The Erie Canal was officially opened today here in Buffalo by New York Governor DeWitt Clinton.
Governor Clinton was the master of ceremonies & boarded the canal boat Seneca Chief bound for New York City.
Work on the “Big Ditch”, as it has been called, began in August 1823.*
*After arriving in New York City on September 4, 1825, Governor Clinton emptied a barrel of Lake Erie water in the Atlantic Ocean thus consummating “the marriage of the waters”.