Today is a national holiday in the United States in honor of the birthday of Dr. Martin Luther King, Jr. on January 15 (observed on the 3rd Monday each January).


According to Dr. King’s son, Dexter, his father was inspired by God & acquired his technique from Gandhi.


6 million signatures were acquired on the petition to create the MLK holiday, the largest petition in favor of an issue in U.S. history according to The Nation.


MLK Jr. Day is observed in Hiroshima, Japan where Mayor Tadatoshi Akiba holds a banquet to unify the city’s call for peace with Dr. King’s message of equal rights.


King was born in an upstairs bedroom at 501 Auburn Avenue. 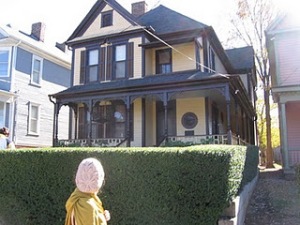 
King’s maternal grandfather, A.D. Williams,  had been pastor of nearby Ebenezer Baptist Church since 1914.


“It was in the surroundings of home, church & neighborhood that King experienced family, Christian love, segregation, diligence & tolerance.”


As a 15 year old student at Morehouse College, King was described as unmotivated, questioning of religion in general & uncomfortable with overly emotional displays of religious worship.


In his senior year, however, King was a serious student who had decided to follow his father’s footsteps & enter the ministry.* 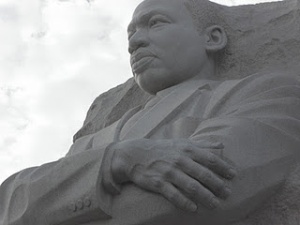 “In this place (Dr. King) will stand for all time….a black preacher with no official rank or title who…gave voice to our deepest dreams & our most lasting ideals.”


“An individual has not started living until he can rise above the narrow confines of his individualistic concerns to the broader concerns of all humanity.”


“In this place he will stand for all time among monuments of those who fathered this nation & those who defended it.  A black preacher with no official rank or title who somehow gave voice to our deepest dreams & our most lasting ideals.”


The memorial, which covers 4 acres,  is located on the National Mall at 1964 Independence Ave.,SW.


A 30 foot statue of Dr. King, which faces toward the Tidal Basin, was made from 159 granite blocks.


The sculptor is Lei Yixin of the People’s Republic of China. 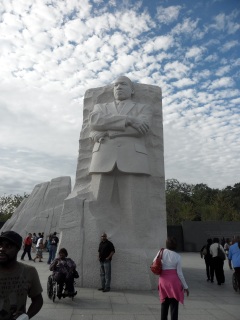 
On the sides of the King statue are these inscriptions:


“Out of the mountain of despair, a stone of hope”


“I was a drum major for peace, justice & righteousness.”


14 quotations from Dr. King’s sermons & speeches are inscribed on a crescent shaped granite wall located behind & on either side of the statue. 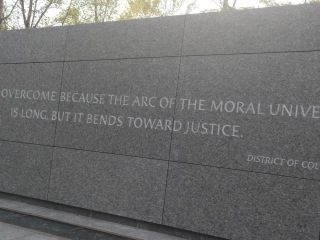 
One of the quotations is from Dr. King’s speech in Los Angeles, California on December 24, 1967.


“I oppose the war in Vietnam because I love America.  I speak out against it not in anger but with anxiety & sorrow in my heart, & above all with a passionate desire to see our beloved country stand as a moral example of the world.”


*The dedication was originally planned for the anniversary date of King’s “I Have a Dream Speech”, August 28, but Hurricane Irene forced the event to be rescheduled for today.  We visited the memorial during our recent trip to Washington on September 25, 2011.

In 1954, King, at the age of 25, became pastor of the Dexter Avenue Baptist Church in Montgomery, Alabama & the following year received a PhD. from Boston University.


That same year he led the Montgomery Bus Boycott to a successful conclusion. 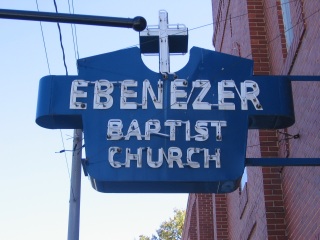 
In 1963, Dr. Martin Luther King, Jr. gave his most famous “I have a dream” speech at the March on Washington.


“I have a dream that one day this nation will rise up & live out the true meaning of its creed: ‘We hold these truths to be self-evident; that all men are created equal.'”


After the speech, Dr. King & other civil rights leaders met with President Kennedy at the White House.  JFK greeted them with the words: “I have a dream.”


In 1964, Dr. King won the Nobel Peace Prize & in 1968 was concentrating his efforts on a “Poor People’s Campaign” & opposition to the Vietnam War.


On April 4, 1968, Dr. King was in Memphis, Tennessee giving support to a sanitation workers’ strike when he was shot & killed while standing on the balcony of the Lorraine Motel.


Dr. King is buried along with his wife Coretta Scott King in Atlanta, Georgia.  The Kings had 4 children.

January 15, 1962
In his press conference today, President Kennedy is asked if US troops are fighting in Vietnam.  He says “no”.  The answer is “technically” accurate since no American combat troops have yet been sent to Southeast Asia.
US military advisers (soldiers & airmen) are, however, serving alongside the South Vietnamese army & air force.

January 15, 1929
Martin Luther King, Jr. is born in Atlanta, Georgia.  The son of a Baptist minister, King will be influenced by Mohandas Gandhi & will become the leader of the Civil Rights Movement of the 1950s & 1960s. 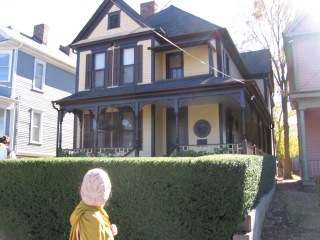 My daughter, Jennifer, visits Dr. King’s birthplace in Atlanta
King, like Gandhi,  will advocate “non-violent resistance”.  He will give his greatest sermon at the 1963 March On Washington when he will say:  “I have a dream.”
President Kennedy welcomes Dr. King & other leaders of the movement to the Oval Office with the words “I have a dream.” 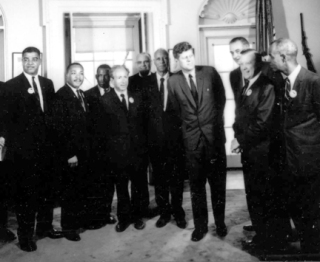 January 15, 1870
With the publication of today’s Harper’s Weekly, Thomas Nast’s political cartoon entitled “A Live Jackass Kicking a Dead Lion” represents the 1st  recorded use of a donkey to represent the Democratic Party.

January 15, 1559
Elizabeth Tudor, 25 year old daughter of King Henry VIII & Anne Boleyn, is crowned Queen of England at Westminster Abbey in London.
Queen Elizabeth I, called the “Virgin Queen” because she chooses not to marry, encourages voyages of discovery such as Sir Francis Drake’s circumnavigation of the world & Sir Walter Raleigh’s expeditions to North America.

In her final address to Parliament before her death in 1603, she says:

“I count the glory of my crown that I have reigned with your love.” 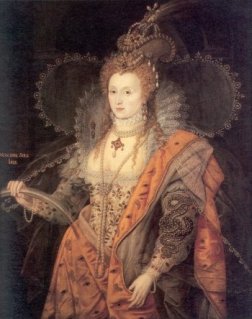