Archive for the category “West Virginia”


President John F. Kennedy returned today to the state which gave him a huge primary victory on his way to the White House in 1960.


JFK was in West Virginia to attend a celebration honoring the 100th anniversary of West Virginia’s admission to the Union.


“I would not be where I now am….if it hadn’t been for the people of West Virginia.”


The JFK Library in Boston adds these words:


“The people of West Virginia–their kindness & fairness, their grit & determination & patriotism made their mark on (President Kennedy).”*


Before becoming a state, the mountainous counties of western Virginia nullified Virginia’s ordinance of secession & proclaimed “The Restored Government of Virginia.”


Life is old there
Older than the trees
Younger than the mountains
Growin’ like a breeze.”


The United States & Soviet Union announced today an agreement to establish a “Hot Line” telephone between the two nations.


The idea for the “Hot Line” came as a result of the October 1962 Cuban Missile Crisis during which the world came close to nuclear war. 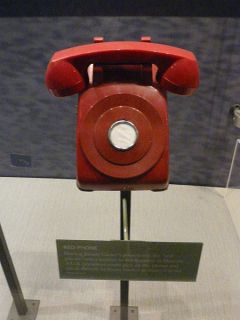 
Civil Rights leaders came to the White House today to listen to President Kennedy’s plea to call off their “March on Washington” scheduled for August of this year.


JFK is concerned that the march will further delay passage of his civil rights proposals in Congress.


The leaders went away, however, with the President’s approval for the march to demand educational & employment reforms. 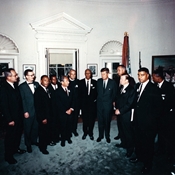 
GREAT SEAL OF THE UNITED STATES IS ADOPTED


In keeping with the theme of 13 states, the Seal consists of various items numbering 13…such as stars, stripes, arrows, etc.


The main focal point of the Seal is the American Bald Eagle holding in one talon, a bundle of arrows & in the other, an olive branch.  The arrows symbolize “defense” & the olive branch “peace”.


The Latin phrase E Pluribus Unum or One Out of Many is printed on a ribbon held in the beak of the eagle.*


*In his State of the Union Address, JFK said:  “In one talon the eagle holds an olive branch & in the other a bundle of arrows.  We intend to give equal attention to both.”