Archive for the category “LBJ Memo on Space Program”


Vice-President Lyndon B. Johnson sent President Kennedy a memo today in response to his request for an evaluation of the US space program.


Following are a few of the points LBJ made in the memo (complete memo available at the JFK Library website):


*The Soviets are ahead in the space race


*US leadership in space is achievable


*Manned exploration of the moon is an “essential” objective 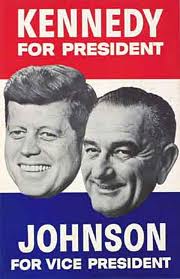 
The US & USSR issued a joint statement today in support of an independent Laos.


The statement was issued despite an earlier refusal on the part of Soviet ministers to meet with US envoy, W. Averell Harriman.


US TROOPS LAND IN DOMINICAN REPUBLIC


President Lyndon B. Johnson has ordered 22,000 American troops to the Dominican Republic to restore order.


US forces will be supported by troops from member nations of the Organization of American States.


The President says that he is hopeful of stopping a takeover by a communist dictator.


Troubles began in the island nation when dictator Rafael Trujillo was assassinated in 1961.*


*Over the next few months the fighting ends with the US helping to install a conservative, non-military government in the Dominican Republic


Heavyweight Champion of the World, Muhammad Ali, was stripped of his title today for refusal to be inducted into the United States Army.


Ali, a Muslim, cited “religious reasons” for his refusal.


“I ain’t got no quarrel with those Viet Cong”.*


*Ali will be found guilty of draft evasion in June & banned from boxing for 3 years.


USS ENTERPRISE SAILS TO THE MEDITERRANEAN


The aircraft carrier is to relieve the USS Coral Sea.


The border guards, who were partisans, discovered Mussolini’s identity despite his attempt to disguise himself as a German airman.


After they were shot dead, the couple’s bodies were transported to a gas station in Milan where they were hung upside down for public viewing & ridicule.

Posted in LBJ Memo on Space Program | Leave a comment