Leaving his men to guard captured Germans, York proceeded to kill 25 enemy soldiers with his rifle & pistol before forcing 132 more to surrender. 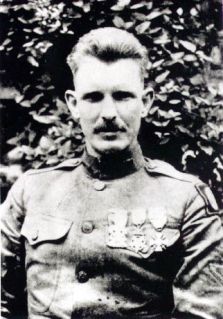 Ironically, Corporal York, a pacifist & lay deacon of his church back in the mountains of Tennessee, was denied exemption from service on religious grounds.

York was drafted into the 328th Regiment, 82nd Infantry.*

*Alvin C. York  was awarded the Congressional Medal of Honor & the French Croix de Guerre.  When he arrived in New York City, York was given the key to the city & a ticker-tape parade.  Back home in Tennessee, he received a farm from the people of his state. 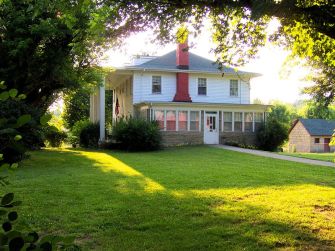 The 1940 film, “Sergeant York” won an Academy Award for Best Actor which went to Gary Cooper.

Alvin York died on September 2, 1964 in Nashville.  His funeral service was held in Jamestown where General Matthew Ridgway represented President Lyndon B. Johnson.

Alvin C. York is a true Tennessee hero.  My high school US history teacher, Coach Jones, often talked about his visits with Alvin York & when I went to Fentress County in the 1980s,  I saw Alvin’s younger brother, George, sitting out on the porch of the York Grist Mill.

When we went inside the small museum, there was an elderly lady who welcomed us & she turned out to be a neighbor of the Yorks who lived with Alvin’s wife, Gracie, after her husband died.