Archive for the category “The Feminine Mystique”


Betty Friedan published her non-fiction work, The Feminine Mystique, today.  The idea for the book came from a survey Miss Friedan gave to 200 of her fellow classmates of Smith women’s college. 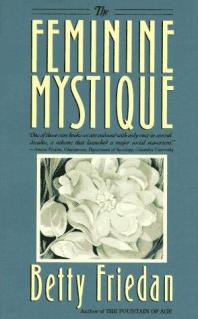 The survey results proved what Friedan suspected:  American women are unhappy & do not know why.


In The Feminine Mystique, Friedan places blame for women’s unhappy state on the “idealized image of femininity” which confines women to the role of housewife thus limiting their ability to pursue career goals.*


The island is defended by 21,000 soldiers who are protected by a network of caves.


The amphibious landings were resisted by 7 Japanese battalions.

*By June 1942, 110,000 Japanese-Americans were moved to internment camps where they lived in poor conditions & under guard.  They would not be allowed to return to their homes until December 17, 1944.


President Reagan signs the Civil Liberties Act in 1988 which will give each survivor of the internment camps $20,000 tax free along with the government’s apology.


The 7 accused “conspirators” of being responsible for violent demonstrations at the 1968 Democratic National Convention in Chicago have been found innocent of the charge of conspiracy.


Originally known as the “Chicago 8” their number dropped to 7 when it was decided to try the 8th member, Bobby Seale, separately.


The group has used the trial as a platform for an attack on the war in Vietnam & President Nixon.


The seven were, however, found guilty of inciting riot.*


*Despite receiving prison sentences, none served time because the court of appeals overturned the original verdict.


The Wizard of Menlo Park, Thomas Alva Edison, was awarded US Patent #200,521 today for his phonograph.


Edison has devised a system that will transfer the vibrations of a diaphragm to an embossing point & then onto a tin-foil wrapped cylinder.  The recording then can be played back on the machine.*


Edison will go on to receive over 1000 patents, more than any other inventor.  The phonograph will be his favorite invention because it brings music into the home.


Today the 3rd Anglo-Dutch War came to an official end as England & the Netherlands sign a peace agreement at Westminster.


Provisions of the treaty include the regulation of commerce in the East Indies & the transfer of New Amsterdam to England.*