Frank Sinatra, a superstar of popular music, died of a heart attack.


Sinatra also starred in a performance for JFK’s inauguration in Washington, D.C.

Reagan Presents the Medal of Freedom
to Francis Albert Sinatra


JFK TALKS TO THE NATION ABOUT BIRMINGHAM


President John F. Kennedy spoke to the nation last night on television regarding the recent violence in Birmingham, Alabama.


“This government will do whatever must be done to preserve order, to protect the lives of its citizens & uphold the law….”


He called upon those on either side of the civil rights issue to live up to the standard set by their leaders in reaching last week’s settlement.


Today, the President met with 26 Alabama newspaper publishers & editors to discuss the situation in their state.

Bombings at the Gaston Motel
Birmingham, Alabama
May 14, 1963
Photo by Mario S. Trikosko


JFK SETS UP COUNCIL ON AGING


The primary focus of the council will be to recommend policies & programs to the President that will assist the federal government in meeting the needs of our senior citizens.


The chairman of the council will be the Secretary of Health, Education & Welfare.


Other members include the Secretaries of Agriculture, Commerce, Labor & Treasury. 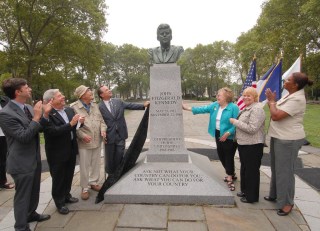 
WARSAW PACT IS A DONE DEAL


A mutual defense treaty has been signed in Warsaw, Poland creating the “Warsaw Pact”.


The USSR & 7 of its European satellite nations, Albania, Poland, Romania, Hungary, East Germany, Czechoslovakia & Bulgaria, will make up the pact.


The need for such an organization arose from the recent decision by the North Atlantic Treaty Organization (NATO) to accept West Germany as a member & permit her to rearm.*


*With the breakup of the Soviet Union, the Warsaw Pact dissolved in 1991.


STATE OF ISRAEL IS PROCLAIMED


“SKYLAB” IS LAUNCHED INTO ORBIT


The US space station follows by 2 years the launch of the world’s 1st space station, “Salynut”, by the Soviets.*