Archive for the category “JFK Spends Easter at Palm Beach”


The estate at Palm Beach was purchased by JFK’s father, Joseph P. Kennedy, Sr. in 1933.


This afternoon the President was able to enjoy 14 rounds of golf at Seminole Country Club.


President Woodrow Wilson, speaking to a joint session of Congress today, asked for a war declaration against Germany.


In his address, Wilson called attacks by German submarines to be “a warfare against mankind”.


The President concluded his message with these words:


“There are many months of fiery trial & sacrifice ahead….civilization seeming to be in the balance.  But the right is more precious than peace…”


“We shall fight for democracy….& make the world itself at last free.  God helping (America) can do no other.”


Jeanette Rankin of Montana became the 1st woman elected to Congress to officially be seated in the House of Representatives today.


Miss Rankin, a social worker who joined the women’s suffrage movement, ran on a progressive Republican platform calling for the right to vote for women nationwide.


Congresswoman Rankin’s seating has been delayed a month as Congressmen debated whether or not a woman should be admitted to the Congress of the United States.


*At one point in his message, Wilson says: “It is a distressing…duty, Gentlemen of the Congress, which I have performed in this address to you.”  It would be interesting to know if the President purposely omitted mention of the Congresswoman.


On April 6, the House voted on the war declaration.  Miss Rankin was one of 50 representatives who voted against it.  Despite her vote, she helped sell Liberty Bonds to raise money for the war effort.


For the next 20 years, Jeanette Rankin worked as a lobbyist, but in 1941 was back in the Congress to cast the only vote in opposition to a declaration of war on Japan after the attack on Pearl Harbor.


Rankin was founding Vice President of the Civil Liberties Union & also spoke out against the Korean & Vietnam Wars.  She died in 1973 at the age of 92.


With the fall of Petersburg after a long siege, the Confederate States of America’s capital city, Richmond, Virginia, fell today.


With General Robert E. Lee & his Army of Northern Virginia still in the field, Davis is hopeful of keeping the Confederate government functioning.


Retreating Rebel soldiers set fire to bridges & warehouses but the fire spread out of control leaving Richmond in flames.*


*I am currently reading James Swanson’s “Bloody Crimes: The Case For Jefferson Davis & the Death Pageant for Lincoln’s Corpse”.  This book has an excellent description of the fall of Richmond & Jeff Davis’s attempt to escape capture. The book is published by William Morrow (2010). 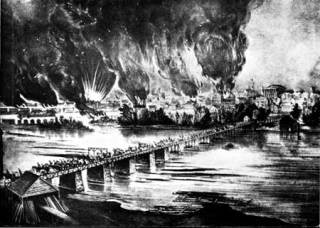 
Today the Spanish explorer Juan Ponce de Leon landed on the eastern coast of North America at a place he has named “La Florida” or “Land of Flowers”.*


*Some sources claim that Ponce de Leon was in search of the fabled “Fountain of Youth” which promised by drinking its water a person would become young again.  In researching this claim, I came across a very interesting article by Douglas T. Peale.  He argues that the idea that the explorer was searching for the Fountain of Youth is fiction.


The article, “Misconceptions & Myths relating to the Fountain of Youth & Juan Ponce de Leon…”,  can be found at www.pbchistoryonline.org