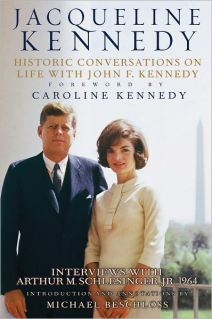 The fifth conversation was recorded on March 24, 1964.

Arthur Schlesinger asks Mrs. Kennedy about JFK’s feelings about the invasion of Cuba (Bay of Pigs).

“Well, obviously leading up to it, he was always uneasy.”

Jackie recalls a telephone call that Jack had with Dean Rusk in which he gave the “Go ahead”, but Schlesinger reminds her that it was about “the air strike.”

She adds that “that’s the one time I saw him, you know, terribly, really low.”

“(Jack would) say, ‘Oh, my God, the bunch of advisers that we inherited.'”

Of  the day they learned of the failure of the invasion, Mrs. Kennedy says:

“He came back over to the White House to the bedroom & he started to cry, just with me.

You know….just put his head in his hands & sort of wept.

And it was so sad, because all his first hundred days & all his dreams, & this awful thing to happen.

And he cared so much….all those poor men who you’d sent off with all their hopes high & promises that we’d back them & there they were, shot down like dogs or going to die in jail.”

“And when the chips were really down, it was Bobby whom he turned to,

*It was after the Bay of Pigs that JFK convinced Bobby to become his confidential adviser on foreign, defense & intelligence policy.

Map of Cuba based on a public domain image, by Zleitzen