The title of Chapter 15 is GOALS.

Chris continues his description of JFK’s 1963 visit to West Berlin.

He tells us that 2/3 of the German city’s population turned out for JFK’s motorcade & 300,000 gathered in Rudolph Wilde Platz to hear him speak.

Chris writes, & this reminds me of why I like Chris Matthews so much, that President Kennedy’s speech that day was “the greatest of the Cold War.”

While I have heard that speech many times over the years, I haven’t really considered how JFK felt when he looked at the Berlin Wall.

After Germany, Air Force One took JFK to the land of his ancestors, Ireland.

He would become the 1st President of the United States to visit that country during his term of office. 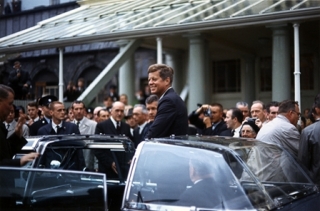 Then JFK traveled to the United Kingdom, where he paid a visit to Derbyshire & the grave of his sister, Kathleen.

Chris tells us that he carried “some flowers….& prayed.”

**The plaque on the ground says JFK visited here in 1963.

Thanks to Diane for permission to use this photo on JFK+50.

Please visit her great blog at

As JFK concluded his triumphal European trip, Averell Harriman was in negotiations with Nikita Khrushchev on the Nuclear Test Ban Treaty.

The Soviet premier told Harriman that JFK’s speech at American University had “paved the way” for the treaty.

The ban on nuclear testing in the atmosphere, outer space & underwater became official on July 25, 1963.

As we have stated before on JFK+50, Chris reminds us again that President Kennedy “considered this his greatest achievement.”

That achievement was tempered by personal tragedy for the Kennedys in early August when their son, Patrick Bouvier, born 5 weeks premature, died.

Chris does a beautiful job of writing this.  It is very hard for me to read it without tears coming to my eyes.

“(Patrick’s) father held his tiny fingers for two hours as the infant tried to breathe.  He was holding them when Patrick died.”

JFK said: “He put up quite a fight. He was a beautiful baby.”