Archive for the category “Halcyon House”


Georgetown, District of Columbia (JFK+50) On our recent trip to D.C., we walked past a very beautiful large Georgian-style classic home just off M Street in Georgetown.


It is the Halcyon House located at the corner of 34th & Prospect Streets.


It was built in 1786 by Benjamin Stoddart, the 1st Secretary of the Navy & an important Georgetown landowner. 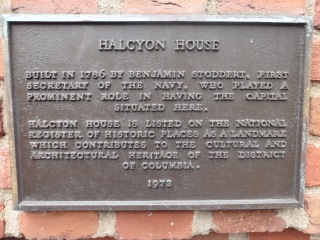 
The home, with gardens designed by Pierre L’Enfant, was a social center in Washington’s early years.


Halcyon House underwent extensive reconstruction from 1978 to 1995 & just last year was on the market for an asking price of nearly $20 million.


The Halcyon House in on the National Register of Historic Places.


The debate was moderated by Bill Shadel of ABC News.


Television monitors enabled the candidates to see & hear each other during the debate.

Senator Kennedy was asked this question:


Vice-President Nixon says that your budget (according to the Democratic Platform) would run 10 billion dollars a year more than his. Do you agree?


Washington, D.C. (JFK+50) Having returned from his 8th fact-finding visit to South Vietnam, Secretary of Defense Robert S. McNamara proclaimed today at a news conference that the military operations in Saigon are “progressing satisfactorily”.*


*McNamara, appointed by JFK, served as LBJ’s Defense Secretary until 1968. He wrote, years later, that in private he had told LBJ progress in Vietnam was really “very slow”. 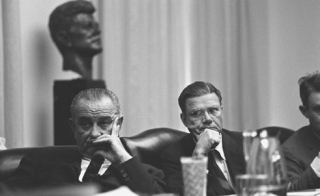 
The Senator called for the government of the United States to provide a program of flood-disaster relief.


Washington, D.C. (JFK+50) A group of Freemasons marched from Georgetown today to lay the cornerstone of what will be the official home of the President of the United States.


The stone was placed at the SW corner of the 1st public building in the new Nation’s Capital.*


The architect of the home, directed to “oversee & implement construction”, is James Hoban who was born in Kilkenny, Ireland. He arrived in the U.S. 5 years ago.


Hoban’s design for the President’s House is based on Leinster House in Dublin which was built by James Fitzgerald.


*”The cornerstone’s location remains the oldest secret of the many that are now part of White House lore.”


The Continental navy is expected to include a fleet of 7 ships: 2 frigates, 2 brigs & 3 schooners.*