Archive for the category “Jefferson Memorial”


Washington, D.C. (JFK+50) The Jefferson Memorial stands on the south side of the Tidal Basin.


The memorial to the 3rd United States President was designed by John Russell Pope in the style of the ancient Roman Pantheon.


Inside the impressive memorial stands a 19 foot bronze statue to the author of American independence & on the wall is the following quotation:


“I have sworn upon the altar of God eternal hostility against every form of tyranny over the mind of man.”   Thomas Jefferson


Washington, D.C. (JFK+50) President John F. Kennedy announced at his scheduled news conference today in the State Department auditorium that he plans to appoint a panel of physicians & scientists to recommend a program of action in the field of mental retardation.


JFK said: “it is a serious personal matter to 1 out of 12 persons & disables 10 times as many as diabetes.”


The President’s sister, Rosemary, was born with a mental condition which worsened after she underwent a labotomy at the age of 23.


The legislation will increase postage rates as of January 7 of next year & will also reform federal salary systems.


Washington, D.C. (JFK+50) President Kennedy today endorsed the Peterson Report issued by the President’s Commission on the Status of Women which he established in 1961.


The report says that American women endure a diminished status resulting in a lack of equal opportunity in both salary & personal fulfillment.


“I wonder whether in our society, women have the chance to use their full powers…along lines of excellence.”


JFK took part in a ceremony at which a commemorative United States stamp honoring Mrs. Roosevelt was presented.


*Apollo 7 will be in orbit for 11 days & will make the 1st televised broadcast while in orbit.


The Clintons plan to live here in Little Rock.*


*In 1978, Bill Clinton became the youngest man to hold the position of governor in any state in history & in 1992, at age 46, was elected the youngest President of the United States since JFK.  Hillary Rodham Clinton serves today as Secretary of State in the Obama administration.


The peace prize was presented to Mr. Carter “for his decades of untiring effort to find peaceful solutions to international conflicts,  & to advance democracy & human rights.”


Jimmy Carter served as President from 1977 to 1981.  During his term of office, he mediated a historic peace agreement between Egypt & Israel.


Mr. Carter is the 3rd US President to win the coveted prize.  The others were Theodore Roosevelt & Woodrow Wilson.


SENATOR KENNEDY ADMITTED TO HOSPITAL FOR BACK PROBLEMS


The medical center is located at 321 E. 42nd Street in Manhattan.


JFK had x-rays taken of his ailing back.


The doctors discussed plans to schedule an operation on the Senator to repair a ruptured disk in his spine.*


“The thin young Senator on crutches could barely navigate the few steps down from the sidewalk into my office.  Pain in his back made it almost impossible for him to step up or down.” 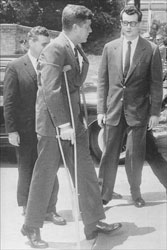 
On the anniversary of the birth of the author of the Declaration of Independence & the nation’s 3rd president, the Jefferson Memorial was dedicated today in Washington, D.C.


FDR concluded with the words:


“The words which we have chosen for this memorial speak Jefferson’s noblest & most urgent meaning & we are proud indeed to understand & share it:


‘I have sworn upon the altar of God, eternal hostility against every form of tyranny over the mind of man'”. 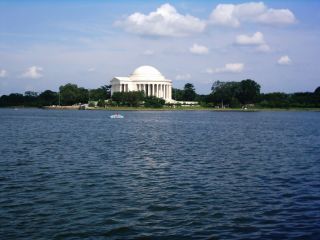 
The top secret “mind control” program, to be run by the Office of Scientific Intelligence, was not to be made public until 1975.


MKULTRA made use of American & Canadian citizens as test subjects & who were administered a variety of mind control techniques including the use of drugs, sensory deprivation, isolation & verbal & sexual abuse.


In 1973, CIA Director Richard Helms ordered all MKULTRA files destroyed but about 20,000 of them accidentally survived. 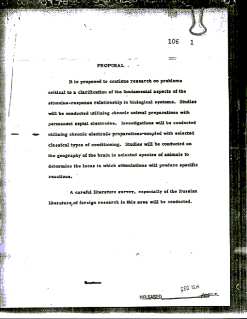 
The Westar I follows Canada’s “Anik Alin” which was launched in 1972.


The satellite is to be used by Western Union for its own internal communications such as sending telegrams & mailgrams to WU bureaus.*


*Westar I was followed by 6 more “Westar” communications satellites.  Westar I was retired from service in 1983.


Their meetings ended with a pledge to strengthen military & economic cooperation between West Germany & the United States.


Captain Jacob Crowninshield of the ship “America” arrived in New York City today with the 1st elephant to ever be seen in America.


Captain Crowninshield purchased the 2 year old female pachyderm in India for $450 & reportedly has plans to sell her for several thousand dollars.


The idea for the piece came from a friend of Handel’s who is a devout Christian.  He suggested to Handel such a piece should be performed in a theater rather than a church to remind people of their faith.


*Beethoven once called Handel “the greatest composer that ever lived”.