Archive for the category “March on Washington”

MARCH ON WASHINGTON ENDS WITH A DREAM


MARCH ON WASHINGTON ENDS WITH A DREAM


Washington, D.C. (JFK+50) The “March on Washington for Jobs & Freedom”, attended by 250,000 people who gathered around the Lincoln Memorial, concluded today with an emotional & stirring address by Dr. Martin Luther King, Jr.


“Even though we face…difficulties, I still have a dream…that one day this nation will rise up & live out the true meaning of its creed ‘We hold these truths to be self-evident, that all men are created equal’.


When we allow freedom (to) ring….we will be able to speed up that day when all of God’s children….will…join hands & sing….’Free at last,  free at last, thank God Almighty, we’re free at last.'”


After the event, civil rights leaders, including Dr. King & Roy Wilkins, met with President Kennedy at the White House who greeted them with the words: “I have a dream.”*


*The March on Washington was initiated by A. Philip Randolph who had planned an earlier march in 1941.

Dr. King Gives “I Have a Dream” Speech

MAHALIA JACKSON ADVISES KING TO “TELL THEM ABOUT THE DREAM”


Washington, D.C. (JFK+50) Dr. Martin Luther King, Jr. asked the Queen of Gospel Music to sing “I’ve Been Buked & I’ve Been Scorned” before he spoke at the March on Washington today at the Lincoln Memorial.


Before she sang, however, Miss Jackson said to Dr. King: “Martin, tell them about the dream”.*


*Dr. King had included the “I have a dream” theme in previous speeches & sermons but it was not included in his March on Washington address.  He followed Mahalia Jackson’s advice & ended his remarks with “I have a dream…”. 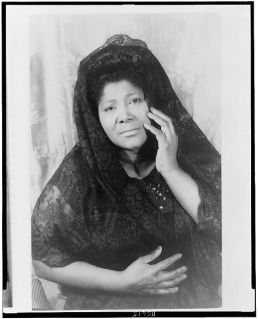 
EMMETT TILL MURDERED IN MISSISSIPPI


Till was in Mississippi visiting relatives & while at Bryan’s Grocery & Meat Market in Money, according to witnesses, “flirted” with the store owner’s wife who is white.*


*Emmett Till’s corpse was recovered 3 days later & returned by the request of his mother to Chicago for burial.  On September 23 an all-white jury found accused murderers J.W. Milam & Roy Bryant not guilty.


“Twas down in Mississippi, not so long ago
When a young boy from Chicago
walked through a Southern door
This boy’s fateful tragedy you should remember well
The color of his skin was black
and his name was Emmett Till


If you can’t speak out against this kind of thing
A crime that’s so unjust
Your eyes are filled with dead man’s dirt
Your mind is filled with dust
Your arms & legs they must be in shackles  & chains
And your blood it must refuse to flow
For you to let this human race
fall down so God-awful low.”


“The Ballad of Emmett Till”
by Bob Dylan


“You will be the personification of a special group of young Americans & if you can impress (with) your commitment to freedom (and) to your pride in your country….the influence may be far-reaching.”


Chicago, Illinois (JFK+50) Thousands of anti-Vietnam War protesters massed today in downtown Chicago as the 1968 Democratic National Convention is in session in the city.


The police, however, used clubs & tear gas to get the job done.  Many protesters were beaten, arrested & taken to jail.


All of this was broadcast on television while the protesters chanted: “The whole world is watching.”*


*This event has been described as a “turning point in the cold war” as more & more Americans reject the necessity for fighting in Southeast Asia. 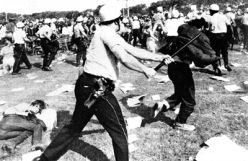 
SUFFRAGISTS ARRESTED AT THE WHITE HOUSE


Washington, D.C. (JFK+50) Women suffragists gathered in front of the White House today in support of a constitutional amendment which would give women the right to vote.


President Woodrow Wilson, who has opposed such an amendment, drove out of the gates of the mansion today & tipped his hat to the suffragists.


Later, however, an altercation broke out between the suffragists & some bystanders who apparently resented the women’s signs opposing the war (WWI).


Some of the suffragists were arrested & taken to jail.

Posted in Emmett Till, Mahalia Jackson, March on Washington | Leave a comment