Archive for the category “JFK Center for the Performing Arts”

JFK CENTER FOR THE PERFORMING ARTS


JFK reaffirmed their goal of building a performing arts facility.


The President said that the creation of a great cultural center in Washington is “a most important national responsibility.”*


Afterward, JFK attended a luncheon at the White House in honor of Chung Lee Park of Korea.


Park had become the leader of Korea after a coup on May 16.


*The John F. Kennedy Center for the Performing Arts opened on September 8, 1971.  It hosts 2000 performances for over 2 million people yearly.


Designed by architect Edward Durrell Stone, the Kennedy Center is administered by a bureau of the Smithsonian Institution. 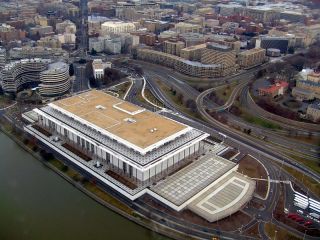 
Washington, D.C. (JFK+50) In his 64th news conference this morning at the State Department, President Kennedy was asked “in view of the current situation in South Vietnam, do you still expect to bring back 1000 troops before the end of the year?”


“We are going to bring back several hundred before the end of the year, but..on the question of the exact number…we (will) wait until…November 20.”

On the question of the overall goal of the United States in Vietnam, JFK said:


“It is our object to bring Americans home, permit the South Vietnamese to maintain themselves as a free & independent country & permit democratic forces to operate.”


After his news conference, JFK attended a ribbon-cutting ceremony opening a new highway from Baltimore to Wilmington, Delaware.


SENATOR KENNEDY WRITES ABOUT THE IMPACT OF TELEVISION ON POLITICS


The Senator says that television has the power to bring the campaign directly to the voter & thus demonstrate the contrast between candidates.


JFK argues that the candidate of “honesty, vigor, compassion & intelligence” will trump the “slick or bombastic orator pounding on the table & ringing the rafters.”


“Nothing compares with the revolutionary impact of television.  TV has altered drastically the nature of our political campaigns, conventions, constituents, candidates & costs.”


The Senator does, however, admit that if Theodore Roosevelt, Woodrow Wilson, Abraham Lincoln & FDR were President during the age of TV, they would have been “tremendously effective”.


In summation, Senator Kennedy puts the ball firmly in the TV viewers’ court:


“It is in your power to perceive deception, to shut off gimmickry, to reward honesty, to demand legislation where needed.  Without your approval, no TV show is worthwhile & no politician can exist.”


The Massachusetts Senator said bluntly that a new presidential administration will be required to implement programs that will enable the United States to “catch up” with the USSR.

Posted in JFK Center for the Performing Arts | Leave a comment