Archive for the category “The White House VII”

Knoxville, Tennessee (JFK+50) Today we continue our report of Chapter 10 of the book by Kenneth P. O’Donnell & David F. Powers with Joe McCarthy.  It is published by Little, Brown & Company. 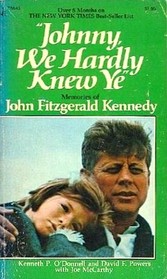 The title of Chapter 10 is THE WHITE HOUSE.

He begins on a positive note by writing that “those who were with (JFK) during the sad night….when he heard the news of the defeat & capture of the Cuban rebels…..remember it as one of his most courageous moments.”

Kenny argues that any other President of the United States would have given in to his military advisers & would have ordered American forces to attack Cuba “to save himself from (the) humiliation (of defeat).”

Ken reminds us that the operation, initiated in the Eisenhower administration, was primarily the work of the CIA under Director Allen Dulles & his deputy Richard Bissell but also with the approval of the Joint Chiefs.

The one thing JFK did insist on, however, was that AMERICAN FORCES would take NO PART in the invasion.*

*The CIA had trained a brigade of 1400 anti-Castro Cuban refugees for the invasion which was targeted for April 17, 1961.

After the news came that the invasion had failed, Kenny says President Kennedy “had little to say to anybody.”

At a press conference, JFK took full blame for the failure.  He said:

“There’s an old saying that victory had a hundred fathers & defeat is an orphan.”

He added that as the “responsible officer of the government,” only he could be blamed.

In private, Kenny writes that JFK wondered aloud “why the Joint Chiefs & the CIA had expected the small landing force….to survive?”

In answer to his own question, Kenny says JFK concluded that the Joint Chiefs & CIA had expected him to give in & order the use of U.S. forces in Cuba.