DAVID FRANCIS POWERS WOULD HAVE BEEN 100 YEARS OLD TODAY!

DAVID FRANCIS POWERS WOULD HAVE BEEN 100 YEARS OLD TODAY! 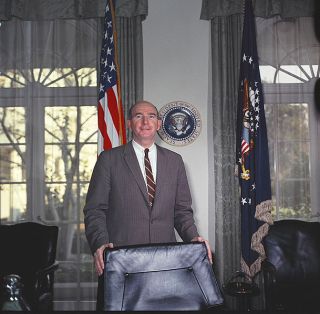 He co-authored “‘Johnny We Hardly Knew Ye’: Memories of John Fitzgerald Kennedy” with Kenneth P. O’Donnell.  The book was published in 1970.*

Following is a newspaper report on the death of Mr. Powers published in the Knoxville News Sentinel on that day.  The report was by The Associated Press.

BOSTON — Dave Powers, the Boston Irishman who was JFK’s famously devoted aide every step of the way to the White House & who served after JFK’s assassination as the keeper of the Camelot legend, died Friday at 85.

Powers came to be known as Kennedy’s “coatholder” because he spent his life tending to JFK’s career, his widow & children, & finally his legacy, as curator of the JFK Library museum.

The child of Irish immigrants, Powers had an Irish-Catholic upbringing in the Charlestown section of Boston.  He hawked newspapers on the waterfront, spent Sundays at the church assisting at five Masses, & knew everyone in the neighborhood.

After JFK was elected president in 1960, Powers served as an unofficial greeter at White House functions & as a full-time friend to the president.

Powers was riding in the presidential motorcade in Dallas when JFK was shot on Nov 22, 1963.  When the president’s car reached Parkland Hospital, Powers helped remove Kennedy & place him on a stretcher.

‘Dave Powers was a loyal & devoted friend whom my mother & father adored.’ said Caroline Kennedy, JFK’s daughter.  ‘I will always be grateful for his personal kindness & for his tireless efforts on behalf of the Kennedy Library.’

Powers is survived by his wife, Jo, a son, two daughters & three grandchildren.

*Tomorrow JFK+50 will begin our report on this classic JFK book.  The title is based on a traditional Irish anti-war song about Irish troops from Athy, County Kildare who fought in “Sulloon” (today Sri Lanka) for the East India Company.

The mug bears the following inscription:

“There are three things which are real; God, Human Folly & Laughter.  The first two are beyond our comprehension, So we must do what we can with the third.”

The inscription is from “The Ramayana” by Aubrey Mennen.