JFK AND NIXON SWORN IN AS FRESHMAN CONGRESSMEN 66 YEARS AGO TODAY!

JFK & NIXON SWORN IN AS FRESHMAN CONGRESSMEN 66 YEARS AGO TODAY!

Washington, D.C. (JFK+50) 66 years ago today, January 3, 1947, John F. Kennedy & Richard M. Nixon were sworn in as freshman members of the 80th Congress of the United States* here in the Nation’s Capital. 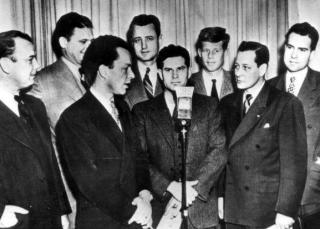 JFK, a Democrat who won election on November 5, 1946 with 71.9% of the vote, filled the seat previously held by Boston mayor James M. Curley.

RMN, a Republican, served with JFK on the Education & Labor Committee.

According to Lance Morrow, in “The Best Years of Their Lives: Kennedy, Johnson, & Nixon in 1948,” JFK “seemed lackadaisical” when he 1st came to Congress & according to his secretary Mary Davis, “took little interest in congressional work” & “did not know the 1st thing about what he was doing.”

Tennessee was represented by 8 Democrats & 2 Republicans, one of which was  2nd District (Knox County included) Congressman John Jennings, Jr.

Posted in JFK AND NIXON SWORN IN AS FRESHMEN CONGRESSMEN and tagged Congressmen Kennedy and Nixon, John Jennings Jr. | Leave a comment