Caroline was born at the Cornell Medical Center here in New York City.


Mrs. Jacqueline Kennedy is 27 years old while her husband, the Senator, is 40.* 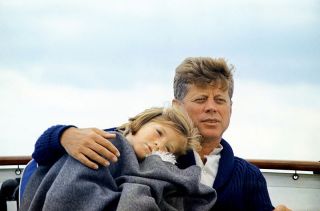 
*Caroline was 3 years old when her father was inaugurated President of the United States & was 6 when he died.  She graduated from Radcliffe College & received a J.D. degree from Columbia Law School.


Caroline Kennedy married Edwin Scholossberg on July 19, 1986 but she did not change her name at marriage.  The couple would have 3 children:  Rose, Tatiana & John.


The discussions will include international problems as well as the economic development of Somalia.*


*Dr. Abdiraschid Ali Schermarche was born in 1919.  He graduated from Sapienza University of Rome with a major in political science in 1958.


The subject of the conversation was the President’s ever expanding waistline.