Four million copies have been sold since the album was released just six days ago.

The “long play” record includes some of JFK’s greatest speeches & tributes to his memory.

The late President was assassinated in Dallas, Texas on November 22, 1963.

Each copy sells for 99 cents & the proceeds go to the Joseph Kennedy, Jr. Foundation for Mental Retardation.

The album was released on the Premier Label.

The title across the top of the cover reads:

The cover displays a large color close-up photograph of the President.

The album is produced by New York City radio station WMCA & is a recording of a program presented on the station on Friday, Nov. 22, 1963.

It is narrated by Ed Brown.

The JFK speech recordings are from the files of Radio Press International.

*The JFK Memorial Album currently is available at amazon.com for $6.75 new & 85 cents used.


The record includes some of JFK’s best speeches & tributes to his memory.  Each copy sold for 99 cents & proceeds went to the Joseph Kennedy, Jr. Foundation for Mental Retardation.


Italian inventor Guglielmo Marconi announced today that he has sent the first “wireless” transmission from Cornwall to Newfoundland, a distance of 2200 miles.


The transmission was the single Morse Code letter “S”.


The announcement has been questioned because apparently there is no independent confirmation of the transmission.*


*Marconi is widely considered to be the inventor of the “radio”.  Ironically, he said: “Have I done the world good, or have I added a menace.” 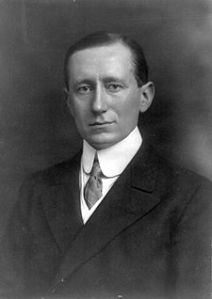