Archive for the category “JFK+50 Honors All Veterans” 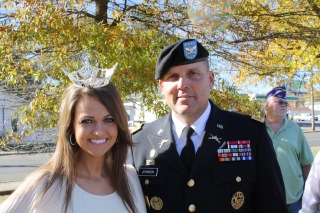 
Knoxville, Tennessee (JFK+50) JFK+50 pays tribute today to all veterans of the armed forces of the United States of America.


Thank you for your service to our country & for defending freedom at home & around the world.


*Veteran’s Day was 1st known as Armistice Day & was proclaimed by President Woodrow Wilson for 11-11-1919, one year after the armistice was signed ending WWI.


“To us in America, the reflections of Armistice Day will be filled with solemn pride in the heroism of those who died in the country’s service & with gratitude for the victory.” 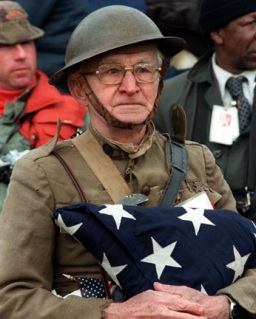 
THE GREAT WAR ENDS IN ARMISTICE


Compiegne Forest, France (JFK+50) The World War ended this morning at 11 o’clock as the armistice that had been signed at 5 a.m. went into effect.


The armistice was signed in the railroad car of Allied Supreme Commander Ferdinand Foch located in Compiegne Forest north of Paris.


Allied forces will occupy the left bank of the Rhine while the right bank will be a neutral zone.


In addition, the Germans are required to give up tons of military equipment including their submarine fleet.


The armistice is to last for 30 days at which time it will be renewed monthly until a final peace treaty can be signed.


*It was known as “the world war”, “the great war” or “the war to end all wars” until a second world war began it 1939.  Then it was called the First World War or WWI. 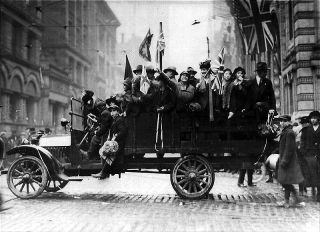 
THE TOMB OF THE UNKNOWN SOLDIER DEDICATED


Arlington, Virginia (JFK+50) Three years to the day after the armistice was signed ending the Great War, the Tomb of the Unknown Soldier was dedicated today here at Arlington National Cemetery.


The ceremony was presided over by President Warren G. Harding.


The remains of an unidentified American soldier who was killed in France were placed in his final resting place of honor.*


*The Tombstone for the Unknown Soldier was designed by sculptor Thomas Hudson Jones & completed in 1932.


The remains of unknown soldiers from other major 20th Century wars were added.


The inscription on the stone reads:


“Here Rests in Honored Glory An American Soldier Known but to God.” 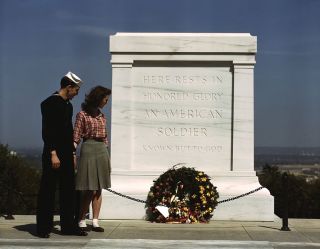 
JFK LAYS WREATH AT THE TOMB OF THE UNKNOWN SOLDIER


Washington, D.C. (JFK+50) President John F. Kennedy, a veteran of the United States Navy in World War II, took part in a Veteran’s Day ceremony today at the Tomb of the Unknown Soldier in Arlington National Cemetery in Virginia.


The President took part in the laying of a wreath at the tomb.


In his address at Arlington today, JFK said:


“The only way to maintain the peace is to be prepared in the final extreme to fight for our country & to mean it.”


“Let no nation confuse our perseverance & patience with fear of war or unwillingness to meet our responsibilities.” 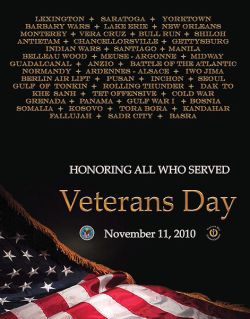 Posted in JFK+50 Honors All Veterans | Leave a comment