“On December 23, 1913, President Woodrow Wilson signed the Federal Reserve Act into law….(creating) a Federal Reserve System, comprised of a … Board, twelve regional reserve banks, and the underpinnings of a smooth central banking system.


It was the most comprehensive overhaul of the nation’s banking system since the Civil War and represented one of the crowning achievements of President Wilson’s New Freedom program.”
Miller Center of Public  Affairs www.millercenter.org 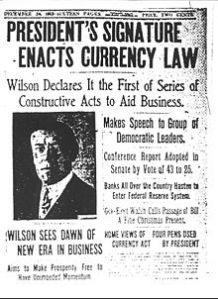 The Federal Reserve has been the subject of criticism before & after it became law.   In his book, Banking and Currency and the Money Trust (1913), Charles A. Lindbergh, Sr. (father of the famous pilot) wrote:
“This act establishes the most gigantic trust on earth….The worst legislative crime of the ages is perpetuated by this banking and currency bill.”
On June 4, 1963, JFK signed Executive Order 11110 which returned the power to issue currency (as previously established in the United States Constitution) to the United States government without going through the FEDERAL RESERVE (as established by the Federal Reserve Act of 1913).
Between January 1963 & October 1964, $768 million “Silver Certificates” were issued bearing the signature of JFK’s Secretary of Treasury, C. Douglas Dillon.

The website hubpages.com says:  “President Kennedy was on his way to putting the Federal Reserve….out of business.”
Economics has never been one of my strongest interests & I have found much conflicting information online about the Federal Reserve in regard to JFK.


Apparently there are some people who believe his Executive Order 11110 has “sinister” implications in regard to powerful interests whom it would impact.