Archive for the category “Birth of a Nation”

BIRTH OF A NATION


MACV IS SET UP IN SAIGON


The MACV, headed by General Paul D. Harkins, replaces the United States Military Assistance & Advisory Group which had been created in 1955 to provide US military aid to South Vietnam.


The MACV both enlarges & reorganizes the advisory capacity of the US military presence in Southeast Asia.


PRESIDENT HARDING GETS A RADIO


President Warren G. Harding became today the 1st President of the United States to have a radio receiver in the White House.*


“BIRTH OF A NATION” PREMIERS TODAY


D.W. Griffith’s film, “Birth of a Nation”, premiers today in Los Angeles.  The film, based on Thomas Dixon’s novel,  The Clansman, is the 1st feature-length motion picture.


*The 3 hour movie’s racial “overtones” will make it both controversial & offensive to many.  The NAACP launched a campaign to have the film banned & was successful in doing so in many cases.


Despite the controversy, D.W. Griffith is widely regarded as the “father of cinema”.


THE BATTLE OF PORT ARTHUR


*In 1905, President Theodore Roosevelt will negotiate the end of the Russo-Japanese War & will be awarded the Nobel Peace Prize for his efforts.


The Dawes Act intends to assimilate Native Americans by ending tribal control of reservation lands & by dividing these lands into plots.


The act’s provisions ended with the Wheeler-Howard Act of 1934 which allowed Native Americans to once again own land communally.


MARY QUEEN OF SCOTS IS BEHEADED


Fotheringhay Castle was the scene of the execution of Mary Queen of Scots today.  The 44 year old monarch had been imprisoned for 19 years.  She was implicated in the “Babington Plot” to take the life of her cousin, Queen Elizabeth I.


The Earl of Kent said:


“Your life would be the death of our religion, your death would be its life.”*


*Mary’s son, King James VI of Scotland, accepted his mother’s fate & became King of England, Scotland & Ireland in 1603 upon the death of Queen Elizabeth I. 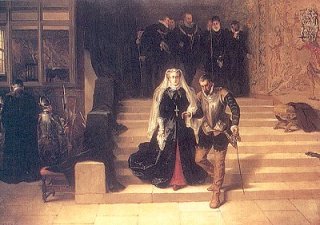 Posted in Birth of a Nation | Leave a comment