Vince Scully, Dodger play by play announcer, said during his radio broadcast of the game:


*Hank Aaron was inducted into the Baseball Hall of Fame in 1982.


President Kennedy threw out the ceremonial first pitch of the 1963 baseball season today.


The ceremony was conducted before the opening day game at DC Stadium.


Each of the captives are to serve 30 years in prison.


Fidel Castro, however, has made an offer to the Kennedy administration.  He will release all the prisoners upon payment of $62 million.*


It authorizes expenditures of $5 million for work-relief programs.*


The WPA also restored theaters such as the Dock Street Theater in Charleston, South Carolina.


The amendment requires the direct election of United States senators.*


*Since the ratification of the US Constitution in 1789, senators had been chosen by state legislatures.


LONGACRE SQUARE HAS A NEW NAME


The new name is “Times Square”.


The new name came as a result of the opening of the new Times Building, home of The New York Times newspaper.*


*Times Square is located at the junction of Broadway & 7th Avenue & stretches from West 42nd to West 47th Streets. 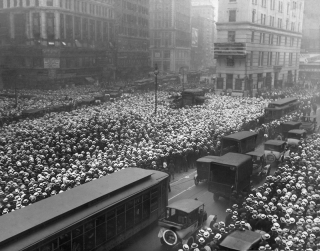