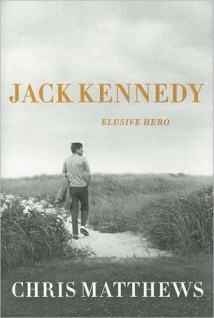 The title of Chapter 2 is: SKIPPER.


Chris begins by writing “War, for a time,  joined the two Jacks as one.”


He tells us that JFK’s war experiences would “transition him into a figure like those who previously consumed his imagination.”


On the way to a PT base in the South Pacific, JFK’s LST transport was attacked by a Japanese aircraft.  That was his introduction to WWII.


“Lt. (JG*) Kennedy found for himself a new world in the navy.  What united the officers was merit.”


The naval officers were college men. Many, like JFK, were from “Ivy League” schools.


Just as he had done at Choate & Harvard, JFK quickly made new friends in the navy.  Men like Paul “Red” Fay & Jim Reed.


Jim Reed related that in the South Pacific one day, Jack said to him that “he’d never had an unhappy day in his life.”


And yet JFK slept on a plywood board & used a corset for his back problems, even before the crash of the PT109.**


**The story of the PT109 can be found on 2 previous postings on JFK+50 (see labels).  We will discuss the new things about the story we learned from Chapter 3.


Chris includes the transcript of a letter written by JFK after the PT109 crash to his girlfriend, Inga Arvad.


In the letter, Jack writes:


“I received a letter…..from (Pappy McMahon’s) wife (who) thanked me for saving her husband.  She said: ‘I suppose….to you it was just part of your job, but (my husband) was part of my life & if he had died, I don’t think I would have wanted to go on living.'”***


***Pappy was the oldest man on the crew of the 109.  At his post in the engine room, he was so badly burned he couldn’t swim.  JFK put a life-preserver on him & with it’s strap clenched between his teeth, Lt. Kennedy did the breast stroke for 3 miles pulling him along behind.

US Flag from the PT109
JFK Library Photo


While JFK won the Purple Heart & Navy & Marine Corps Medals for his heroics, he also contracted tropical malaria & was diagnosed with “chronic disc disease of the lumbar area.”


He had to spend a good deal of time at the Chelsea Naval Hospital when he came back stateside.

To this point, I don’t think we have found anything in Chris’s book that we have questioned or disagreed with, that is until now as Chris Matthews discusses the death of Joe Junior.


Chris writes that Joe Junior was killed “that August….(on) a mission to fly a plane packed with….TNT toward a V3 site on the French coast…”


Sorry, Chris, I always thought it was a V-2 site.  I don’t claim to be an expert on Hitler’s vengeance weapons, but I had not even heard of the V3.


I thought, could this just be a typographical error?  So I did some research on both the V2 & V3.  I did learn something new, there was a V3.


But according to “a fellow officer’s declassified report” posted on the JFK Library website:


“the mission….was to culminate in a crash-dive on the target, a V-2 rocket launching site in Normandy (France).”

The V3 cannon was designed to fire barrages of small rocket projectiles from underground & although designed to reach London “was never used for this purpose due to Allied attacks…”.


And another source says “no shell from a V3 ever hit England.”****


Again, my apologies to Chris Matthews, but based on these sources, I would have to say that it was a V-2, not a V-3, launching site to which Joe Junior was headed at the time of the mid-air explosion.


Chris writes that with Joe Junior’s death, as well as those of his sister Kathleen or “Kick” & her husband, Billy Hartington, JFK “was now ready” to accept his legacy & pursue the political profession.