*This is the 1st national seashore created since Cape Hatteras National Park in 1937.


Today, August 7, 2011 on the 50th anniversary of the signing of this act, the JFK Library in conjunction with the National Park Service hosted a commemoration of the event at the Salt Pond Visitor Center in Eastham, Massachusetts. 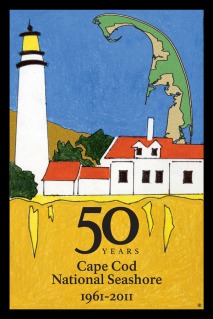 August 7, 1964
TONKIN GULF RESOLUTION PASSES CONGRESS
Washington, D.C. (JFK+50) The United States Congress overwhelmingly approved the Gulf of Tonkin Resolution today.
The resolution, which passed 416-0 in the House of Representatives & received only 2 opposing votes in the Senate, authorizes President Lyndon B. Johnson to do “whatever is necessary…(to assist) “any member of the Southeast Asia Collective Defense Treaty”.
The resolution was proposed by the Johnson administration after an alleged naval engagement 2 days ago in the Gulf of Tonkin between North Vietnamese patrol boats & the US destroyers Maddox & Turner Joy.*
*The only votes cast against the resolution were by Democratic Senators Morse of Oregon & Gruening of Arkansas. 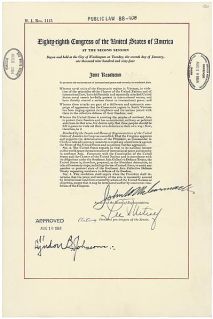 Gulf of Tonkin Resolution
Signed by LBJ
August 7, 1990
BUSH AUTHORIZES OPERATION DESERT SHIELD
Washington, D.C. (JFK+50) President George H.W. Bush ordered today the start of “Operation Desert Shield” in response to the invasion of Kuwait 5 days ago by the Iraqi forces of Saddam Hussein.
The President also authorized an increase in US military forces & resources in the Persian Gulf.*
*On November 29, 1990, the UN Security Council authorized the use of “all means necessary” to remove Iraqi forces from Kuwait.

August 7, 1943
PT109 SURVIVORS RESCUED BY US NAVY
Solomon Islands (JFK+50) The survivors of the PT109 crew & their commander, Lt. John F. Kennedy, were rescued today by US Navy PT boats.
JFK & his crew were 1st met by an Australian coast watcher who had been alerted by JFK’s message carved on a coconut & brought to him by local natives.
The PT boats arrived at 10:30 this evening at Ferguson Passage where JFK & Barney Ross had attempted unsuccessfully to flag down a passing rescue vessel.
At 11:15, JFK & his crew were brought aboard PT157 & welcomed by the ship’s commander, LT. W. F. Liebenow.*
*Reportedly JFK was upset with the delay in the rescue operation & was “venting” his unhappiness to the commander who said: “Calm down, Jack, we have some warm food for you” to which JFK replied sarcastically “No thanks, I’ve just had a coconut.”

Progressive Party Certificate (1912)
http://www.nationalcowboymuseum.org
*”The real winner in 1912 was democracy in the form of presidential primaries. By running & losing….by refusing to be counted out, TR had firmly established the new primary system.”
Theodore Roosevelt Association
http://www.theodoreroosevelt.org

National Progressive Party Convention
Chicago, Illinois
Library of Congress Photo
JFK was the beneficiary of the primary system in gaining his 1960 Democratic nomination for President.  It is unlikely he could have won without it.
JFK+50
August 7, 1782
GENERAL WASHINGTON CREATES MERIT BADGE
Newburgh, New York (JFK+50) General George Washington, Commander in chief of the Continental Army, created here at Newburgh today the “Badge of Military Merit”.
The decoration consists of a purple heart shaped piece of silk with the word Merit” stitched in silver across the face.*
*The Badge of Military Merit was to be awarded to Elijah Churchill, William Brown & Daniel Bissell, Jr. who served in the Revolutionary War.
Since April 5, 1917, the PURPLE HEART is awarded US Armed Forces personnel who have been killed, wounded in action, or who have suffered as POWs.