Nixon’s father, Frank, owned a lemon ranch but the family struggled financially & grieved the deaths of two of Richard’s brothers. 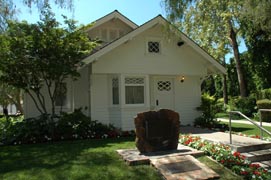 In 1922, after the failure of the ranch, the Nixons moved to Whittier, California where Frank ran a grocery store & gas station.

Richard Nixon attended Whittier College where he became a champion debater & went on to Duke Law School in North Carolina where he graduated 3rd in his class in 1937.

Nixon married Pat Ryan in 1940 & the couple would have 2 daughters, Tricia & Julie.

Mr. Nixon served in the US Navy in WWII & after the war was elected to the United States Congress.

Richard Nixon served as Vice President of the United States during the Eisenhower years, but was defeated by JFK in the presidential election of 1960.

Having been defeated for Governor of California in 1962, Mr. Nixon defeated Hubert Humphrey in 1968 to become the 37th President.

After a successful 1st term, particularly in the area of foreign policy, President Nixon won an overwhelming victory over George McGovern in 1972.

In 1974, however, Nixon was forced to resign after the Watergate scandal.