Archive for the tag “St. Columba”

Massachusetts Senator John F. Kennedy spoke today at the Milton Seminary Benefactor’s Day because , in his words, of the importance of the work of the St. Columban’s Foreign Mission Society.*

*St. Columba, recognized as one of the great pioneers in Western European civiliation, is the patron of the Missionary Society of St. Columban.

St. Columba was born in Leinster, Ireland in 543.  He left to proclaim Jesus Christ & His Gospel in Western Europe & founded missions in France, Germany, Switzerland & Italy. 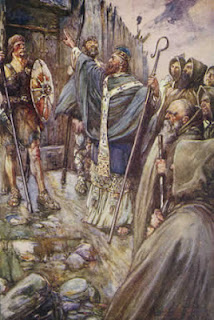 In his address, JFK recalled his rescue & that of the crew of the PT109  by natives of the Solomon Islands during WWII.

The Senator credited the efforts of rescue on the part of the natives to the “good work of the Christian missionaries” who taught them to be “willing to save the lives of total strangers at the risk of their own.”

“We came from the powerful United States, (the native) from a jungle home on the islands.  (He & his fellow natives) had learned well the teachings which the Columban fathers have helped to spread around the world–teachings on the brotherhood of all men under God.”

“Here at Milton, we can understand better that Christianity is a way of life…that eternal truths & the problems of the world cannot be separate.”

The Senator made the point that it is our responsibility, through works & example, to “stimulate a revival of our religious faith.”