The fourth conversation was recorded on March 23, 1964.

“What were your own thoughts about getting in the White House?”

“I used to worry about (it)….It’ll be a goldfish bowl, the secret service, I’ll never see my husband (but I) found out it was really the happiest time of my life.”*

“It was when we were the closest–I didn’t realize the physical closeness of having his office….in the same building & seeing him so many times a day.” 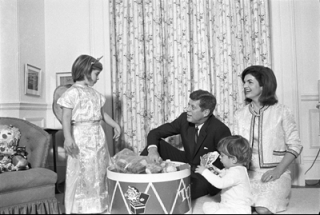 “Did he ever talk about what he might do after he left the White House?”

Jack was (really) thinking about being (the) publisher of a great (news) paper. I think he would have gone around the world, written a book, done something with his (presidential) library.”

Arthur Schlesinger wonders where they would have lived after the White House years.

“Cambridge (Massachusetts).  Jack always said we shouldn’t live in Washington. He was right.”