Knoxville, Tennessee (JFK+50) We would like to wish everyone in the United States & all Americans throughout the world, a very happy Thanksgiving holiday.


The American Thanksgiving holiday is traced back to the 1621 celebration held at Plimoth Plantation. 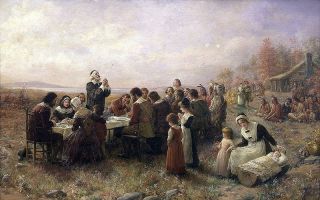 “The First Thanksgiving”
by Jennie A. Brownscombe (1914)


The Soviets were not permitted to board the train despite claims that there was an East German “stowaway” on board.


After a brief standoff, an East German citizen was turned over to the Soviets & the train was allowed to pass.*


*JFK was briefed on this development while celebrating the Thanksgiving holiday in Hyannisport.


JFK’S BODY LIES IN STATE AT THE WHITE HOUSE


A military honor guard removed the flag draped coffin from the Navy ambulance & placed it in the East Room.


A private funeral mass is scheduled for 10 a.m. & members of Congress, the Supreme Court & other government officials may pay their respects afterward.


The new President, Lyndon B. Johnson, issued a proclamation making the day of JFK’s funeral, November 25, 1963, a national day of mourning.


In issuing the proclamation, LBJ said:


“I invite the people of the world who share our grief to join us in this day of mourning & rededication.”


Washington, D.C. (JFK+50) Millions of people around the world, including Pope Paul VI, are mourning the death of President John F. Kennedy today.

Here in Washington, hundreds of people have gathered outside the gates of the White House.


In a telegram to President Johnson, Khrushchev said:


“John F. Kennedy’s death is a serious blow to all people who cherish the cause of peace & Soviet-American cooperation.”


In London, Sir Winston Churchill issued a statement that said JFK’s assassination has “taken from us a great statesman & a wise & valiant man.”


Dallas, Texas (JFK+50) The lone suspect in the assassination of President John F. Kennedy, Lee Harvey Oswald, was shot today by a Dallas nightclub owner as he was being transferred to the Dallas County Jail. 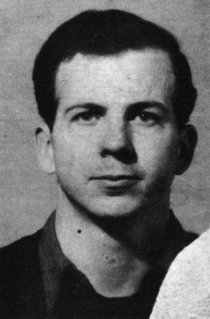 
The shooting took place this morning as Oswald was being led out into the garage area of the basement of Dallas City Hall & Police Headquarters.


A stocky man in a suit & hat suddenly appeared from a line of reporters & fired a shot into Oswald’s abdomen at close range.


The man who did the shooting, Jack Rubenstein, was immediately disarmed, wrested to the ground & taken into custody.


Oswald was rushed to Parkland Hospital, where President Kennedy died on Friday afternoon, for emergency surgery.


Oswald, who had a massive wound, was pronounced dead at 1:07 p.m. Dallas time.


Rubenstein, who goes by the name of Jack Ruby, owns the Carousel Club here in the city.  Mr. Ruby’s motive is not known.


The shooting was being televised live nationally at the same time President Kennedy’s body was being taken from the White House to the Capitol.